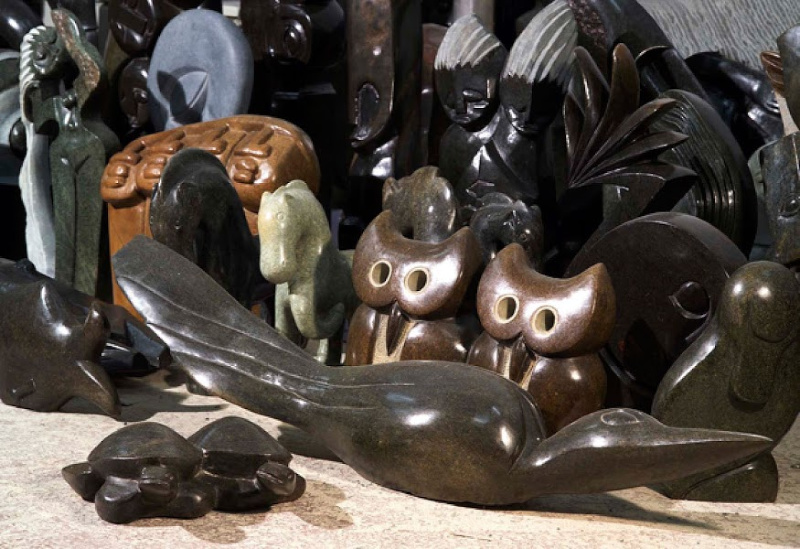 Despite obtaining a motor mechanics diploma at a private college in Harare, Tendekai Tigere Tandi finds himself surviving on stone sculpting, something that he started as a hobby while in his pre-school age.

Tandi is one of Zimbabwe’s self-taught, third-generation stone sculptors at Chitungwiza Arts Center, and he started commercial stone sculpting in 1998.

Before, he had been doing stone sculpting as a hobby since his father and grandfather were all in the trade.

His unique skill has seen him doing several pieces that have been bought overseas including in Canada, Germany and the United States, in addition to doing portraits of former Zimbabwean President Robert Mugabe, former South African President Nelson Mandela and Sam Nujoma, the former President of Namibia.

He is currently working on a portrait of American comedian, television host, actress and producer, Ellen Lee DeGeneres, as his fame continues to grow worldwide.

Now, Tandi, 42, has set his eyes to conquer the Chinese market where there is growing interest and demand for Zimbabwean stone sculpture.

Traditionally, the bulk of his clients have been from Western countries but due to the economic downturn in the country which has also affected tourism, Tandi has now turned his focus to the emerging but promising Chinese market.

“Right now the Chinese market is the best one for me. It is a good market and for me it’s currently my number one,” said Tandi who recently exhibited his works at the second China International Import Expo (CIIE) in Shanghai last month.

Locally, more and more Chinese customers are coming to his workshop in Chitungwiza to buy his art works.

“With growing tourism between our two countries, a lot of Chinese people are now visiting us and buying quite a lot of art works from us,” he said.

Tandi first went to China in 2010 where he represented Zimbabwe and exhibited his works at the 2010 Shanghai World Expo. He stayed there for three months.

Last year, he was invited by the country’s trade promotion body, Zimtrade, to participate at the inaugural CIIE in China.

“I went for CIIE last year and it was really good. We met many Chinese customers and some companies who bought artifacts from us. It was a good trip, we made good business. I sold 34 medium pieces and some smaller ones.

“When Zimtrade decided not to go this year, I said I don’t want to miss this opportunity and I went there on my own to further establish our market. Now we have quite a number of customers in China and some companies as well that are approaching us. Some are interested in starting galleries with Shona art,” said Tandi.

The CIIE had become an important platform to promote cultural exchange between Zimbabwe and China, as well as to explore further business opportunities, said Tandi.

“I will attend next year’s CIIE because that is where I get my market. China is my biggest market at the moment and I don’t want to let the market down,” he said.

Tandi said he regularly ships his stone works to China for customers who would have placed orders. In August, he sent a container with 134 pieces to a customer in Wenzhou, China.

He also attended fairs in Yiwu, which is famous for its small commodity trade and vibrant market, shipping about 60 big pieces and small ones to the Asian city in this year.

What is more exciting for Tandi is that despite the cultural differences, the Chinese people are fast falling in love with Zimbabwe’s unique stone sculpture, liking both old and contemporary, modern types of stone carvings.

“At first I used to think that the Chinese have a different taste of stone carvings. I used to go there with fine art like the human faces and animals but when I went there last year for CIIE, I took some abstract sculpture and different types of art works and they were really interested in the art,” said Tandi.

“Through media, a lot of people in China are now leaning about other people’s cultures so its culture which motivates what you buy and through that they are beginning to buy different types of artifacts from us,” added Tandi.

However, Tandi said they face some hurdles in the Chinese market, such as the language barrier.

“It takes us a lot of time to explain to them and to show them the originality of the Zimbabwean, African art.”

Tandi said he was still to get some Chinese people who know more about the Chinese market to help him market his works.

“A lot of Chinese people are approaching me, they are interested but they still want to know more about our art so that they can market it in China,” he said.

The Chinese, he added, are fascinated by Zimbabwe’s hand-made stone carvings.

He said a lot of their customers like hand-made stone works, which is more expensive than those made by the machine.

Carvings made by the machine have a greater finishing touch and are well polished, while with manual work, one has capacity to meticulously carve and put all the details with minimal risk of mistakes.

Tandi is also helping young people in the northern part of the country where there are vast woodlands to carve art works using wood. He is also training young artists at the Chitungwiza Arts Center as part of efforts to give back to the community.

Due to the economic down turn, around 70 stone sculptors now remain at the Center, down from 100.