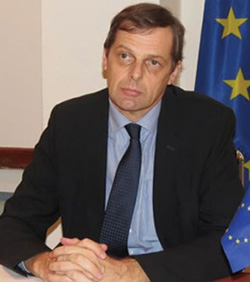 THE European Union is working with the government to identify priority projects that could be funded through the 1.3 billion Euro Regional Indicative Program which will be launched in Botswana next week.
In an interview, EU ambassador Philippe Van Damme said Zimbabwe needs a comprehensive strategy to derive maximum benefit from the program as allocation will be demand driven.
“We will be receiving funding from the 1.3 billion euro Regional Indicative Programme that will be formally adapted in Gaborone next week.
“The program, which will cater for the COMESA region, will focus on peace and security and regional integration and will also include development of regional infrastructures,” he said.
The program will also focus on trade related support. The allocation for Zimbabwe will compliment the National Indicative Programme.
“There are 25 countries in the COMESA region; as Zimbabwe, we are discussing with the ministry of Finance and the ministry of Industry and Trade to put our act together so as to tap into this fund,” Van Damme said.
“We need to identify priority actions that could be funded through the regional programme. The allocation process will be demand driven, so we need a comprehensive strategy that will draw a substantial allocation.”
The ambassador said the country is likely to receive funds for the National Indicative Programme early next year. The EU will extend 234 million Euros to support socioeconomic programs in Zimbabwe over the next five years.
“We have consulted widely with government, EU member states and the civil society on the National Indicative Programme. We now have what we believe is an interesting program as it is aligned to ZIMASSET,” he said.
“The programme is currently undergoing an adoption procedure in Brussels, as all programs have to be discussed in the Economic Development Fund committee. Thereafter it will be formalized in the legal department.
“The decision process will take us a couple of weeks. However we hope that, if all goes well, we will be able to finalize and sign the National Indicative program in early 2015 which is valued at 239 million euros.”
The EU last month lifted its decade-long economic sanctions on Zimbabwe, paving way for the regional trading bloc to resume financial support to the southern African country.Advertisement