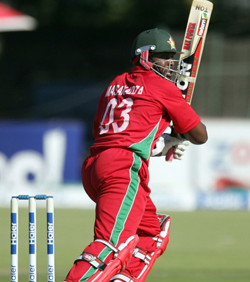 Zimbabwe 246 for 3 (Masakadza 85, Sibanda 54, Taylor 43*) beat Pakistan 244 for 7 (Misbah 83*, Hafeez 70) by 7 wickets
THE last time Zimbabwe beat Pakistan in any format was 15 years ago. Back then, Pakistan lost to arguably the most formidable Zimbabwe side in history – one that was capable of standing up to the best international sides.
With the cricketing climate in the country having undergone a drastic change since then, any victory by current setup against a top side will be remembered for long. Coming off a disappointing T20 series, where Zimbabwe failed to figure out how to close out a chase, they held their composure and applied themselves better despite the short turnaround time.
A strong opening stand of 107 between Vusi Sibanda and Hamilton Masakadza was the bedrock in their chase of 245 in Harare.
Having dealt with the seamers with ease during the T20s, Zimbabwe’s chances of victory hung on how they would perform outside their comfort zone. They looked ill at ease against the spin trio in the T20s but crucially, this time, they didn’t let the spinners run away with the advantage. Saeed Ajmal managed to strike, but the long interval between breakthroughs meant that Pakistan were always playing catch-up.
In the closing stages, Pakistan had created enough pressure to bring the equation down to a run-a-ball, but a combination of poor fielding and freakish luck meant that it was Zimbabwe’s day.
Before this match, Masakadza spoke about the importance of his duty, as an opener, to set the base and not allow pressure to build on the lower order. Back at the top, a position he is comfortable with, and with an opening partner from school days, Masakadza took the initiative by hammering Junaid Khan for three boundaries in an over.
The openers were strong through the off side against the left-armers and the boundary barrage prompted captain Misbah-ul-Haq to bring in spin from both ends from the eighth over.
The spinners managed to keep the runs down but wickets eluded them. Misbah used all five bowlers by the end of 12 overs and the breakthrough finally came in the 24th, when Sibanda stayed back to an Ajmal ball that spun back in.
Masakadza reached his fifty the following over and continued to take on the spinners, sweeping Ajmal and reading Shahid Afridi’s variations. He chipped down the track and lofted Afridi over extra cover for six in an over that produced 13. The frustration showed in Pakistan’s fielding, when in that over, a drive back to the bowler which should have been stopped resulted in two runs.Advertisement

Masakadza fell during the batting Powerplay, smashing Ajmal straight to cover. It was only temporary relief for Pakistan because by then Brendan Taylor was set, having already hit four boundaries.
Pakistan didn’t do themselves any favours in the field, though. A struggling Timycen Maruma tried to loft over long-on but Ahmed Shehzad was in two minds whether to catch or stop the ball and the ball bounced over his head for four. Taylor himself was let-off, on 37, when a reverse sweep went straight to point where Junaid dropped it. Luck was firmly in Zimbabwe’s favour.
Maruma’s wobbly knock suggested that Zimbabwe were starting to panic, but Sean Williams, aided by some good fortune, ensured his side held the edge with a spicy cameo. An inside edge off Junaid hit the base of the stumps but miraculously, didn’t dislodge the bails. Worse still for Pakistan, it went for four. Williams sealed the win in style, smashing a six over midwicket to give Zimbabwe their first ODI win against a top team since October 2011.
Pakistan, winning the toss, found runs hard to come by at the start due to steady seam bowling, recovered in the middle thanks to Mohammad Hafeez’s brisk half-century, and stumbled towards the end, failing to accelerate due to the pressure caused by the sudden fall of wickets. What prevented them from suffering a complete meltdown was Misbah-ul-Haq, who carried on his good form from the West Indies with his fourth consecutive fifty.
It was a mixed day for Zimbabwe in the field. A series of drops at the start showed that the team had hardly made any progress on that front since the India tour. Mohammad Hafeez was a beneficiary of one of those drops, when on 10. He went on to score 70, but the pace of his innings was crucial, with Misbah not deviating from his tried and tested conservative approach in the middle overs.
Hafeez found early momentum with three sixes off Prosper Utseya, down the ground, though he was lucky the second one wasn’t pouched at the boundary’s edge. Hafeez was strong through the off side, punishing the offspinners in particular. He picked 48 of his 70 runs off Utseya and Malcolm Waller, picking the large gaps square of the wicket on the off side.