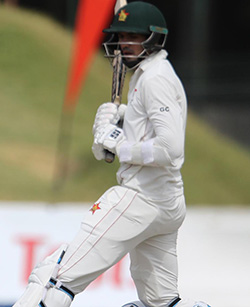 WHEN John Hampshire was appointed coach of Zimbabwe in the lead-up to their first Test match in 1992, the Yorkshireman was quick to lay out the extent of their ambitions.
The batsmen were taught how to leave, and the bowlers instructed to bowl a foot outside off stump. When Zimbabwe crossed 400 in their first innings against India, taking nearly two days to do so, a player had the temerity to suggest that they might declare. Hampshire’s spiky response made it clear that they would be doing nothing of the sort. Zimbabwe drew the match, and viewed it like a victory.
Forever the underdog (aside from the years of Bangladesh’s Test infancy), Zimbabwe’s ambitions have rarely risen since. The country’s pitches are the very definition of ‘nondescript’, boasting little pace, average bounce, no real turn to speak of. Little wonder then that, asked how difficult it had been to take 10 wickets on the final day to beat Zimbabwe in their 100th Test, Rangana Herath’s eyes became wide as the air escaped from his mouth.
In truth it shouldn’t have even been close. With Tino Mawoyo and Brian Chari seeing off the first hour of the day, Mawoyo and Hamilton Masakadza taking care of the second, and lots of batting to come, Zimbabwe should have notched up the 27th draw in their history, leaving everyone to debate Herath’s decision not to declare earlier.
“You cannot plan for whether it’s raining or not,” was how he saw it. “We had a plan with the coaches to declare before the end of the [fourth] day but we couldn’t do that because of the rain. You can’t rely on the weather, so you have to keep on playing as it is.”
When Mawoyo got a rough decision from umpire Simon Fry, given out lbw to a delivery from Dilruwan Perera that was comfortably missing his leg stump, Zimbabwe embarked on their standard collapse and questions around Herath’s decision-making receded.
“We were really happy with the start we had, but then when we started to lose a few wickets we panicked,” said Graeme Cremer.
Yet over the next 45 minutes, the air of inevitability around Zimbabwe’s defeat dissipated. Sean Williams and Peter Moor dug in, and Herath found himself being tested in his first Test as captain.Advertisement

Unlike fifth-day pitches back home, he could not wheel away from one end all day knowing that he could do the job all on his own. Nor could he post three slips and a gully and back his quicks to wrap it up. Field placements were changed, bowlers were rotated.
Eventually it was Lahiru Kumara who showed why he had been picked at the age of 19, with just two first-class matches under his belt. Kumara endured a tough introduction to Test cricket on day two, when he registered a first-ball duck with the bat, started his bowling with five wides down the leg side and was taken off after two overs.

Over the next three days, on a slow pitch with no lateral movement, his pace proved its worth. In the first innings he had separated a 132-run stand when, bowling in the heat of the day, he sent down a bouncer that Moor could only fend to slip. Now, with the sun at its hottest once again, he rattled Moor with a series of short deliveries before trapping him lbw, jumping on the crease.
“For me he’s an interesting character,” Herath said of Kumara. “He’s quick and I’m sure he’s a good prospect for Sri Lankan cricket. I tell you a lot of credit goes to the fast bowlers. There was not much assistance for the spinners and the Zimbabweans batted well. But the fast bowlers played their heart out and gave 100%, which is the main thing.”
That was the back of Zimbabwe’s innings broken, but Sri Lanka still had to contend with Cremer. And Williams was in belligerent mood, blocking out delivery after delivery, then reverse-sweeping the spinners for four when he wanted to silence the fielders around the bat. Asela Gunaratne’s inclusion at the expense of another spinner began to look questionable, given the friendly nature of his medium-pace.
Before tea, Herath changed ends. During the interval, clouds welled up in the south, as they had prior to the fourth evening being lost to rain. The light faded. But fourth ball after the break, Williams edged to slip. When Herath trapped Donald Tiripano lbw soon after, it looked like Herath was just doing what Herath does on the final day of Test matches: bowl his side to victory.
Sri Lanka didn’t care that Tiripano had edged it, giving them a sixth dubious decision – and 10 lbws in a game where not one had gone against them. “It’s just one of those things that happens in cricket,” Herath said.

The clouds moved off, and the sun came out. Carl Mumba started blocking. At the other end Cremer looked immovable. Herath switched ends. He then took the second new ball and switched ends again. The overs ticked down. 15, 14, 13, 12. Zimbabwe, through their captain Cremer, were on their way to their objective. Herath switched ends. Then something unbelievable happened. For the first time in over seven hours at the crease, Cremer lost his head.

Out of nowhere, with Zimbabwe less than 10 overs from drawing, he leaped down the pitch, missed one from Herath, and was stumped. Having cheered every dot ball wildly, the small crowd went quiet. “I blame myself for losing this game,” said the Man of the Match. “If I was there then at least if Carl [Mumba] or Chris [Mpofu] had got out then I would have felt a lot better about myself, but I think my wicket was the turning point in us losing this game.”
It wasn’t quite over yet. Mpofu, one of Test cricket’s worst No. 11s, saw off the over from Herath. Then Mumba took care of two more. Seven overs to go. On the balcony, Heath Streak was in the same seat he’d occupied all day. “Even with No. 10 and 11 out there we still thought, ‘Shee, we’ve still got a chance here,'” reflected Cremer.
Dilruwan returned. Mpofu fended one to midwicket, then dabbed another square on the leg side. The crowd cheered. 7.4 overs left. But Dilruwan flighted the next one, Mpofu pushed forward, and the ball took off stump. A young Sri Lankan side had passed their first test. Zimbabwe had lost their 100th, but rediscovered some of their moral fibre. Test cricket felt alive in Zimbabwe once again, and so did the spirit of Hampshire.