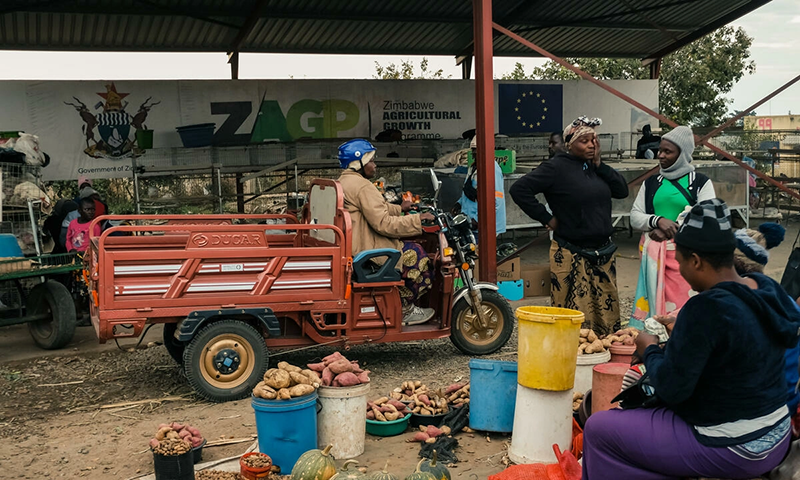 For years, Danai Bvochora’s modest poultry farm was a tanned year. Almost all the money earned from the sale of his eggs was used to pay for the shared taxi to go to the market.

Until a rust-coloured electric tricycle, like a moped nested in an open trailer, powered by solar energy, came to change the game.

“We were carrying heavy on our heads. The tricycle lightens the burden,” smiles the 47-year-old farmer, from Domboshava, near the capital Harare, before a bumpy eight-kilometre journey with the machine.

Transport is scarce in the depopulated rural areas of the country.

“We even use it to go to mass!” enthuses Danai, adding that a trip to fetch grain to feed his chickens once cost the equivalent of twelve dollars. Against 2.5 to load his tricycle every two weeks.

“Now my chickens are bringing me back,” says the mother, who is part of the group of women, in this corner known for its picturesque hills and giant rocks, who received a tricycle last year funded by the European Union to help small farmers.

Assembled in Harare by the social enterprise Mobility for Africa, these off-road three-wheelers have been around for three years in Zimbabwe, says its founder Shantha Bloemen.

Until then, women walked for a long time, along the roads, their necks stiff under the weight of the goods balancing on their heads. Which sometimes rotted in the sun.

Yet the arrival of these tricycles raised some eyebrows, says the American who settled in Zimbabwe in the early 1990s, in the luggage of a UN agency.

“We were very lonely at first”, the team had to convince investors of the viability of the project. “No one was talking about electric mobility in Africa, let alone helping women in the countryside,” says the fifty-year-old.

Today, it aims for a rapid tripling of the fleet of 88 vehicles as well as the three stations currently powered by solar.

There, drivers can exchange their lithium battery for a fully charged one, and have the tricycles repaired free of charge if there has been breakage.

Some vehicles, nicknamed Hamba or “go for it” in the local language Ndebele, were bought by the EU and then offered to locals, others are rented for five dollars a day.

Phyllis Chifamba, 37, uses her rental “go-there” as a taxi. She leads the sick to the clinic, pregnant women to their follow-up appointments, farmers to do their shopping. “That way, I feed my family, I pay for my four children’s school.”

Mobility for Africa dreams of investing in other parts of the country. “If we could solve the transport problem, rural economies would work. Small farmers could come to the market with more products,” says Shantha Boemen.

Zimbabwe’s economy, which has been seriously damaged over the past twenty years, especially in rural areas, is mainly driven by the informal sector, like these peasant women in Domboshava.