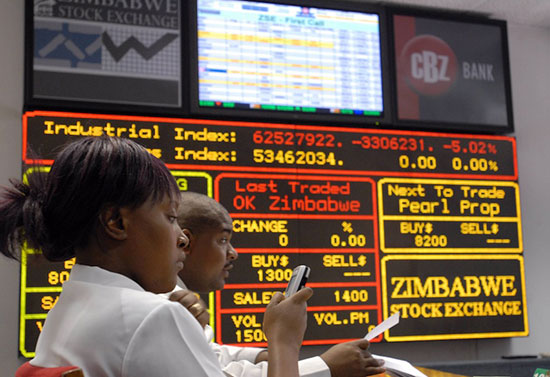 HARARE: Zimbabwe’s stock market this week took its biggest dive since October last year, losing $2,7 billion in the week as investors reacted to the possibility of a transitional government which could stabilise the struggling economy.
The industrial index dropped 18,59 percent to close the week on 432,72 points while the mining index lost 2,69 percent to close at 134,4 points.
Market capitalisation declined by 18,34 percent from $15,12 billion in the previous week to $12,35 billion.
Market turnover however doubled to $84,1 million from $39,7 million recorded in the previous week, partly attributed to a huge sell off of Econet shares on Thursday. Locals traded Econet shares worth $31,14 million on Thursday.
The largest company by market capitalisation, Delta shedded 36,37 percent to settle at 203,75 cents while telecoms giant eased 27,96 percent to close the week at 134 cents.
Analysts say the market is self correcting from the current bull run which has left most companies overvalued.
“If the biggest fundamental which was pushing everything up comes to an end, we expect the market to correct itself from the panic buying and we are likely to see a pullback on the local bourse,” an analyst said.
The market was mostly moved by currency risk induced by the bond notes, a surrogate currency which was introduced in November last year to address the acute cash shortages experienced in the country.
Analysts say punters who were seeking to profit from the bullrun might lost their bets if the unfolding events continue to go against their forecasts.
“Trading will be a bit tight on the local bourse because of too much uncertainty surrounding what might possibly happen given the current political situation in the country,”
an equity analyst said.
While some had predicted that a surprise military takeover would bring certainty to the market — foreign investors sold off sharply in the week.
Foreigners disposed of shares worth $24 million and bought shares worth $15,7 million.Advertisement