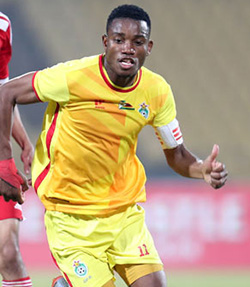 CAPE Town: AmaZulu have received a major boost with the news that Zimbabwe forward Ovidy Karuru has committed his long-term future to the Absa Premiership outfit.
The 28-year-old, who joined Usuthu as a free-agent after being released from Kaizer Chiefs last season, has also had spells in France, with US Boulogne and in Belgium for Oud-Heverlee Leuven.
Comfortable on either wing, Karuru, who has played just four times in the league this season, with two assists, is expected to feature more prominently under head coach Cavin Johnson after ending speculation over his future.
“We are pleased to announce that we have extended with Karuru until the end of 2019 with an option until 2020,” Usuthu’s General Manager, Lunga Sokhela told the club’s website.
“He’s a vital member to have in the team, in our plans this season and going forward.”
Karuru has scored seven times for the Zimbabwe national team in 25 appearances and captained the side during their successful COSAFA Cup campaign in July.
Advertisement