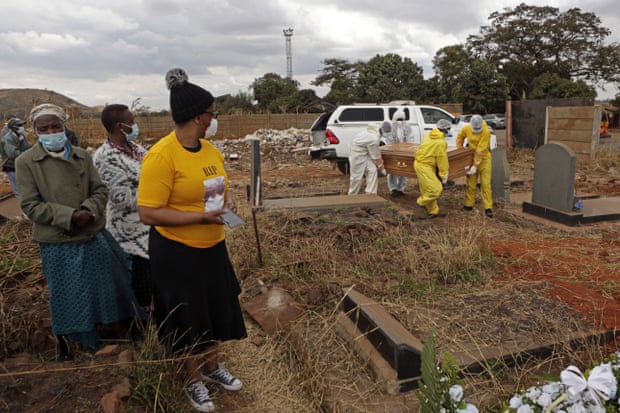 A family at a cemetery in Harare watch pallbearers carry the casket of a relative who died from Covid-19.
Spread This News

A group of women sing hymns at the cemetery in Harare as undertakers, dressed in Covid-19 protective gear, gently lower a white casket into the grave.

“This world is not our home,” they sing, as relatives, standing a few metres away, mourn their loss.

The deceased is a 31-year-old man who died from coronavirus. He arrived at the hospital too late to be helped.

As this group of mourners leave, another hearse pulls up at Warren Hills cemetery to bury another Covid-19 victim.

About half a dozen burials will be conducted in quick succession over the day in an effort to keep up with the grim task of burying Zimbabwe’s dead, as the third wave of the virus continues to claim hundreds of lives every week.

According to the Ministry of Health and Child Care, almost half of the country’s total Covid deaths up to that point occurred in July. Over the course of the month, 58,996 infections were recorded, the highest since the beginning of the pandemic, and more than 1 700 people died.

To date, a total of 3,826 deaths have been recorded by the World Health Organisation since March last year.

The huge increase has overwhelmed undertakers, resulting in delayed burials, authorities have admitted.

Outside one of Zimbabwe’s biggest undertakers in central Harare, dozens of bereaved people wait impatiently to be seen. Some have waited for three days, as the company struggles to cope.

Philip Mataranyika, the owner of Nyaradzo Funeral Services, said: “Because there have been many deaths, the end-of-life industry has been under immense pressure, resulting in delays all round. Burial of our beloved ones has been delayed by a day or two.”

With bodies piling up in morgues, Mataranyika pleaded with Zimbabweans to observe Covid protocols.

“I implore you, fellow countrymen, to observe the World Health Organisation guidelines and those issued by our government so we can be safe and avoid infection.”

An undertaker who works at the Nyaradzo funeral home, but did not want to be identified, says he is preparing 30 bodies for burial each day.

“I identify about 30 bodies a day and most of them are Covid-related. July was really busy; I sometimes knocked off around midnight. This has taken a huge toll on my body too as I am always tired. The third wave has killed a lot of people,” he says.

“Delays have been happening due to strained resources; we cannot execute all burials at once. We are now doing a booking system and if we reach a certain number, like 30, we defer the burial to the following day.”

Dozens of graves are being dug every day as demand for spaces has more than tripled over the past two months.

Jairos Mutseyami, 37, a gravedigger at Warren Hills cemetery, says: “I am always exhausted after work. It is also tough to work under such conditions – I am in constant fear of getting Covid. Only God keeps us here.”

Beven Mudepu, 35, who sells wreaths from a stall outside Nyaradzo undertakers, says mourners were buying up to 30 wreaths a day last month.

“We see hundreds coming to the parlour daily and some unlucky ones can wait up to three days to get their relatives’ bodies. They say there is no capacity to deal with the surge in deaths,” Mudepu says.

Norman Matara, president of the Zimbabwe Association of Doctors for Human Rights, says frontline workers are hopeful that Covid-19 deaths will decline with the end of the southern hemisphere winter.

“It seems we are now on the peak of the third wave, although the cases are still high. We expect the death rate to go down soon. But people are dying – we are seeing about 60 to 70 deaths a day, even up to 90, and that is a lot of lives lost,” he says.

Matara warns the public against complacency. People with severe symptoms should report to hospital sooner, he says, as delays have been a major cause of fatalities.

“People are using unconventional means to cure Covid and when they see that it is not working, they come to the hospitals. [By then] it would be too late to deal with such cases,” he says.

Zimbabwe is pinning its hopes on its largely successful vaccination programme. More than 2 million people have so far received at least a single dose.

Late last month, the country authorised the use of Johnson & Johnson vaccine, the first vaccine made in the west to be approved in Zimbabwe, which already has Chinese vaccines, the Indian-developed Covaxin and Russia’s Sputnik V.