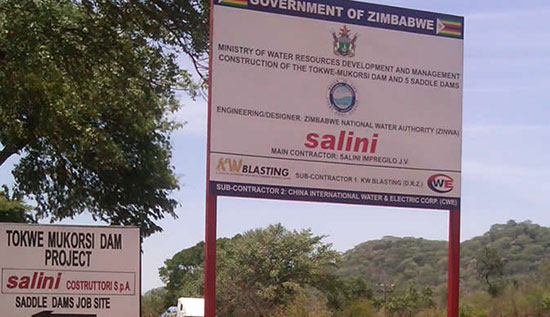 ZIMBABWE is reaching the end of construction on its $300 million Tokwe-Mukosi Dam, a project first proposed about five decades ago, which will supply water to sugar growers in the south of the country.
Construction of the dam, which will have capacity of 1.8 billion cubic meters (475 billion gallons) of water, started in the 1990s, but progress stalled repeatedly on funding shortages.
“It’s 99.9 percent finished, just finishing touches to be done,” resident engineer Paul Dengu said on Wednesday at the project site, about 200 miles (322 kilometers) south of Harare, the capital. Civil-engineering work will be completed by the end of the month, and final studies are under way for a hydropower plant linked to the dam, he said.
Tokwe-Mukosi will be Zimbabwe’s second-largest man-made reservoir after Kariba on its northern border, with the potential to irrigate about 25,000 hectares (61,800 acres) of farmland, offering a boost to sugar producers and other farmers, said Adelaide Chikunguru, a spokeswoman for South Africa’s Tongaat Hulett Ltd., which grows sugar in the region.
The Tokwe-Mukosi dam, built by Italy’s Salini-Impregilo SpA, will also have a hydropwer plant that will provide 15 megawatts of electricity, according to Taurai Maurukira, an engineer with the Zimbabwe National Water Authority. The nation’s rainy season runs from November to April, and the reservoir currently contains about 170 million cubic meters of water, or 9.4 percent of its capacity.
Kariba, on Zimbabwe’s northern border with Zambia, is the world’s largest by volume when full.
The Infrastructure Development Bank of Zimbabwe has spent $290 million on the dam since 2011 when construction most recently resumed, Robert Malunga, a project manager at the institution, said in an interview. All financial commitments for the facility have been met, he said.
Tongaat Hulett, which said in November that volumes were being affected by restricted irrigation levels in Zimbabwe, helped facilitate a payment for about 6 million euros ($6.5 million) to the contractor in return for the dollar equivalent in the southern African country, Chikunguru said in an e-mailed response to questions. Zimbabwe, which abandoned its own currency in 2009 and mainly uses the dollar, is grappling with a shortage of foreign exchange.Advertisement

About 5,500 people still live on land in the vicinity of Tokwe-Mukosi, which is expected to be half full by year end, and relocation will require about $20 million, Dengu said. The government was accused by New York-based Human Rights Watch of mistreating about 20,000 people moved from flood sites in 2014 .