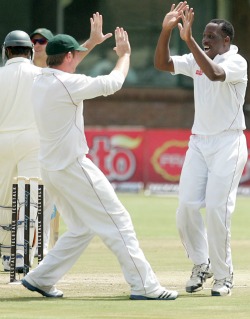 Zimbabwe 389 and 187 for 7 (Taylor 80*, Robiul 6-55) lead Bangladesh 134 (Masakadza 4-32, Jarvis 4-40) by 442 runs
ZIMBABWE finished the third day of the first Test with a lead of 442 runs after Bangladesh were bowled out for 134 in their first innings at Harare Sports Club on Friday.
The hosts made 187 for the loss of 7 wickets in their second innings as Captain Brendan Taylor was unbeaten on 81 at the end of the day, with Keegan Meth on 13.
Robiul Islam was the pick of the bowlers for Bangladesh, claiming 6 of the 7 wickets to fall.
Earlier, the Tigers were all out for 134 in 54.1 overs conceding a deficit of 255 runs as the batsmen struggled against Zimbabwe’s pace bowlers.
However, Zimbabwe chose not to enforce the follow-on as they focused on piling up a big total for Bangladesh to chase in the fourth innings.
Zimbabwean pacers Shingi Masakadza and Kyle Jarvis did the most damage, picking up 4 wickets each. Keegan Meth, the third pacer, also picked up 2 wickets.
Jahurul Islam top scored for Bangladesh with 43 while Mohammad Ashraful and Shahriar Nafees made 38 and 29 respectively.
None of the other Bangladeshi batsmen was able to reach double figures.
Mahmudullah Riyad’s dismissal in the first session of the day started the collapse for Bangladesh, as from 112 for 2, Bangladesh lost the remaining 8 wickets for only 22 runs.
Bangladesh team started their innings on Thursday after the hosts were all out for 389 in their first innings.
Breadan Taylor contributed 171, the highest score for a Zimbabwean captain.
Robiul Islam and Enamul Haque jnr were the most successful Bangladeshi bowlers, picking up 3 wickets each.
Rubel Hossain and Sohag Gazi also shared 4 wickets between them.
Earlier on Wednesday, Bangladesh captain Mushfiqur Rahim won the toss and chose to send the hosts to bat.
Both the teams started the Test in contrasting moods as Bangladesh had two good test series against West Indies and Sri Lanka in the past six months, while Zimbabwe have had five consecutive losses in Tests.
Zimbabwe’s last success in Tests came in August 2011 when they beat Bangladesh in a one-off Test match.
SQUADS:
Zimbabwe: Vusi Sibanda, Timycen Maruma, Hamilton Masakadza, Brendan Taylor, Malcom Waller, Richmond Mutumbami, Elton Chigumbura, Keegan Meth, Graeme Cremer, Shingi Masakadza and Kyle Jarvis.
Bangladesh: Shahriar Nafees, Jahurul Islam, Mohammad Ashraful, Mushfiqur Rahim, Shakib Al Hasan, Mahmudullah Riyad, Nasir Hossain, Shohag Gazi, Enamul Haque, Rubel Hossain and Robiul Islam.Advertisement