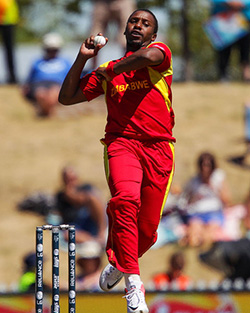 ZIMBABWE and Ireland were neck and neck for 98.5 overs before the hosts’ No. 10, Tinashe Panyangara sealed the result of the first ODI with a gutsy hit down the ground.
The second match will likely produce much the same sort of cricket as these teams match each other strength for strength.
Zimbabwe will be searching for their first ODI series win at home for more than two years, but they will have to get past an Irish side who have built a reputation for never-say-die cricket. This could really go either way.
The pivotal battle will be between the batsmen and spinners on either side. Despite the home side’s desire for faster tracks, the sheer amount of cricket played at Harare Sports Club over the last few months has sapped the freshness out of the square.
Extraordinarily high temperatures in the lead-up to the second match will bake the pitches even further, and spin will be the method of control for both sides. Indeed, there were only 40 overs of seam bowled in the first match, and this number is likely to get even smaller.
The batsmen who found success in the first ODI – Ed Joyce and Gary Wilson from Ireland, Craig Ervine and Sikandar Raza from Zimbabwe – all played in a generally similar manner, keeping the ball along the ground, aiming for the gaps and biding their time before going on the attack.
Raza, who is usually more attacking in nature, was the only man playing out of character. This sort of attritional cricket, and the ability to manoeuvre the ball 360 degrees will be vital to the setting of a defendable total.
Conditions are only likely to get more challenging for the batsmen as a heat wave hits the country over the weekend.
With a larger crowd hopeful for a series win expected for this game Ireland will feel a long way from home when the temperatures soar on Sunday. Yet one wouldn’t put it past them to secure a series-levelling win.
In the spotlight:
Zimbabwe has a strong history of cricketing families. The Flowers, the Strangs, the Rennies, the Whittalls, the Ervines, and the Masakadzas have graced Zimbabwean XIs. Wellington Masakadza, Hamilton and Shingi’s younger brother, debuted on Friday and impressed in all areas, pocketing two sharp catches at point and two wickets with his left-arm spin. He also shared in a vital 38-run partnership with Raza that steered Zimbabwe towards victory. Ireland have a pretty impressive left-arm spinner of their own. George Dockrell is only a year older than Masakadza at 23, but he’s vastly more experienced – Friday marked his 50th ODI for Ireland. He played a leading role in choking Zimbabwe’s middle order with a miserly 2 for 29, and might have had three if he had been able to hold on to a sharp return catch from Masakadza.Advertisement

Team news:
Zimbabwe are usually loathe to change a winning XI, and they will probably go with the same team. Perhaps the only question mark is over the place of Malcolm Waller, who didn’t have a great day in the field or with the bat on Friday and looked out of sorts. Yet dropping Waller after a bad day out would do nothing for his confidence, and would also necessitate tinkering unnecessarily with the batting order.
Probable squads:
Zimbabwe: Chamu Chibhabha, Richmond Mutumbami (wk), Craig Ervine, Sean Williams, Elton Chigumbura (capt), Sikandar Raza, Malcolm Waller, Luke Jongwe, Wellington Masakadza, Tinashe Panyangara, John Nyumbu
Ireland: William Porterfield (capt), Paul Stirling, Ed Joyce, Andrew Balbirnie, Niall O’Brien, Gary Wilson (wk), Kevin O’Brien, John Mooney, Andrew McBrine, George Dockrell, Tim Murtagh.