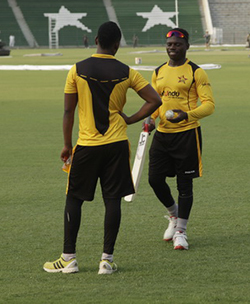 ZIMBABWE Cricket (ZC) team head Ozias Bvute said on Tuesday that that no one can guarantee complete security anywhere in the world as anything can happen anywhere even in the safest environment.
“No place in the world is safe,” he told reporters during a press conference at Lahore’s Gaddafi Stadium in Pakistan.
The Zimbabwe cricket team landed at the Allama Iqbal International Airport Tuesday monring to become the first Full Member nation to tour Pakistan since March 2009.
Zimbabwe will play two T20Is and three ODIs at the Gaddafi Stadium in Lahore between May 22 and 31 before departing on June 1.
The visitors landed amid extensive security, with thousands of policemen deployed along the 14 kilometre route to their hotel.
The touring group – 16 Zimbabwe players, nine team officials and five board officials – was flanked by a large convoy of police commandos, after they had been received by two provincial ministers along with the top brass of the Pakistan Cricket Board (PCB).
Bvute said his team had come to Pakistan to express solidarity with country’s cricket that suffered due to tour pull-outs by other international sides in the past.
“For many years, as you know, Zimbabwe was isolated,” Bvute said, referring to ZC’s self-imposed isolation from Test cricket between September 2005 and August 2011.
“We understand the politics of isolation. No one knows better than us what it is like to have international teams refusing to play in your country citing security or other reasons.
“We therefore say isolation is not the right way. In order for brothers to relate to one another we must break the barriers that exist between us and we must interact.”
He said the Zimbabwe team had come to Pakistan with a message of peace and brotherhood and had no political agenda.
“We are here to play cricket and we have no security concerns about playing in Pakistan,” he noted.