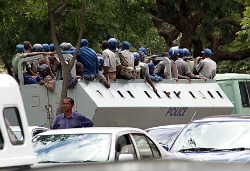 THE spirited search for Lucifer and other expelled angels has taken Zimbabweans so many years and cost them many lives and lots of spirit, energy and property. The Zimbabwean economy and polity have for so many years been defined by pain, suffering and death. Slowly looked at, the lucifer is not hiding anywhere behind dark clouds or somewhere in the dingy caves and fierce forests. The evil that is punishing Zimbabweans is in the open, in the thoughts and actions of visible and audible, tangible even, politicians.
I write this article to warn the protagonists and antagonists in Zimbabwean politics (ruling party and opposition) against the carelessness of allowing the present situation to degenerate into a civil war. I also write to warn Zimbabweans against semi-blind excitement about disorder, chaos and anarchy under the mistaken thinking that it will get our favourite leader to State House the following morning.
From the Hammurabi Code in 1792 to 1750 Before Christ, through the Divine Right of Kings era, Platonism of 427 to 347 Before Christ, and our own heritage from the ancient African sages, good politics are those that preserve rather than imperil lives.
My previous article, which warned about civil war, delved on the various enemy groups in Zimbabwean politics. Recent events have seen ordinary men and women, informal traders and hawkers, slowly but shockingly realizing their power, discovering that an angry and hungry populace can defeat the police and overpower the army.
Poverty, pain, suffering and death have brought, into the streets, Zimbabweans who don’t aspire for political office or support any party, but simply aspire for food, water and oxygen, basic bare life. And that is the danger. This danger proceeds as politicians in the ruling party and opposition pretend that everything is under control.
Bishops, Pastors and the many Prophets see visions and perform miracles and wonders but are blind to the most obvious evil that is ballooning towards explosion in the villages and streets of Zimbabwe. Our present thoughts and actions as Zimbabweans are not in any way informed by a true understanding of the true cost of war. The history of humanity is littered with stories of foolish men and women who propel themselves to war, winning or losing it, seeing the costs of it, get humbled and wise and run to negotiate, a little too late. Common wisdom and simple intelligence suggests that we look at the cost of war in advance, humble ourselves before we are humbled by the cost of defeats and the price of victory: Lost peace, lost property, lost happiness and many lives lost, and the death of a country.Advertisement