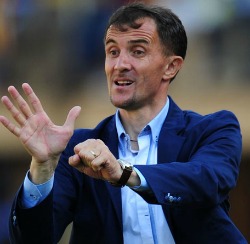 ZIMBABWE will face Uganda in an international friendly game on May 31 at the National Sports Stadium in Harare in preparation for their Afcon 2017 qualifier against Botswana set for June 4 in Francistown.
The Cranes will camp in Harare for two weeks from May 20 in a bid to acclimatise and get familiar with the weather and state of the pitches in Zimbabwe.
Uganda sit second in Group D with seven points tied with leaders Burkina Faso, who have a better goal difference, but the Cranes are desperate to qualify for the continental showpiece for the first time since 1978 when they lost to Ghana 2-0 in the final.
Speaking to supersport.com, Cranes head coach Milutin ‘Micho’ Sredojevic said: “Zimbabwe is a power house of Cosafa, so is Botswana. In that regard, we are looking first at the benefit of the style of play, the Cosafa style of play.”
“They are not only sharing a style of play but also a tribal aspect as the Shona are in Zimbabwe, Botswana and South Africa so we are looking at full acclimatisation on the aspect of football.”
Micho is also keen on adapting to the make of the grass pitches in southern Africa, which he points out are different from those in East Africa.
“The grass here in East Africa or West Africa is totally different from the grass in Southern Africa. I worked at Orlando Pirates and I know the way the ball bounces and the way the ball rolls so we want to benefit in this way in the friendly against Zimbabwe.”
The Ugandan quartet based in South Africa, including Mamelodi Sundowns goalkeeper Denis Onyango, Ivan Bukenya of Kaizer Chiefs, Orlando Pirates’ Yasser Mugerwa and Geoffrey Massa of Bloemfontein Celtics, is expected to be familiar with the pitches and winter during this time.
However, Micho will be looking to set a platform for the entire team to adjust to the winter.
He said: “In the period of June, July and August it gets very cold in the Southern Hemisphere. We are looking to acclimatise to the weather so that the famous sickness that is spreading across Uganda of being excuse makers can be eliminated. We have to make sure we do everything we can in order to deliver what the country and supporters demand — and that is a positive result.”
Uganda defeated Botswana 2-0 in the Afcon 2017 qualifying opener last June in Kampala before edging a stubborn Comoros side 1-0 away. The Cranes then lost to Burkina Faso 1-0 in Ouagadougou before settling for a frustrating goalless draw in Kampala in the double header last month.Advertisement