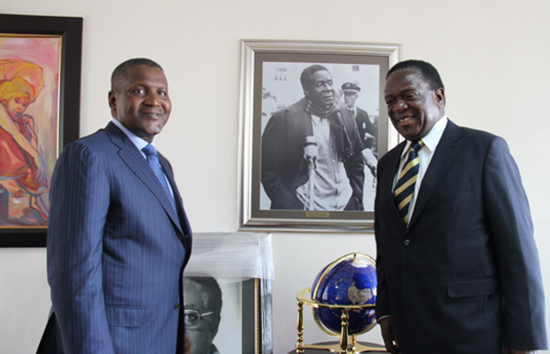 AFRICA’S richest man, billionaire Aliko Dangote, has announced plans to set up Africa’s largest integrated cement plant in Zimbabwe.
Dangote, who was in the country to look for business opportunities announced the deal inn Harare on Monday
The businessman held meetings with President Robert Mugabe, vice president Emmerson Mnangagwa, mines minister Walter Chidhakwa, local government minister Saviour Kasukuwere and several government officials.
The $400 million deal is a major boost for the country which is seeking foreign direct investment to help rebuild its battered economy.
“We want to set up an integrated cement plant here that will be bigger than all the plants that we have elsewhere,” said Dangote.
“We look at setting up something that can translate into a million and half tonnes (of cement) so that even when we continue to use cement there won’t be a shortages here.
“We will be sending a team by next week to look at the areas where we have interests in”.
He added: “The timeframe of the construction shall depend on getting the recommended mining license.
“If we get it this year, we will start construction by the first quarter of 2016.
“We will move in very fast but all the developments will depend with the government of Zimbabwe.”
Early this month, the Dangote Group opened up a cement plant in Ndola, Zambia.
The company is into cement manufacturing, sugar manufacturing and refining, salt refining, flour and semolina milling and noodles and pasta manufacturing, among others.
Dangote has also expressed interest in buying Arsenal football club in England and has cement manufacturing plants in his native Nigeria, Cameron and Asia.
The Nigerian, who is world’s 67th richest man, is worth a net fortune of $17, 2 billion according to Forbes magazine.
He was set to leave the country on Tuesday.Advertisement