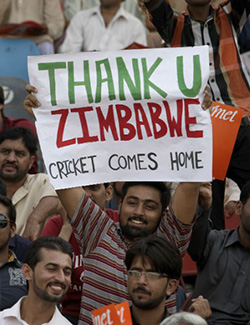 MORE important than any result in the last two weeks for the Pakistan Cricket Board was its demonstration of tight security during Zimbabwe’s tour, the first by any top sporting team since a terrorist attack on the Sri Lankan team’s bus six years ago.
The world cricket community was sceptical, the Zimbabwe team was urged by its government, the players union and security experts warned not to undertake the tour, and the International Cricket Council didn’t send any elite match officials.
As expected, Pakistan dominated the series involving three limited-overs internationals and two Twenty20s in the eastern city of Lahore.
Major security problems didn’t interrupt the tour, either, although there were contrary claims from the Pakistan government over a blast during the series near Gaddafi Stadium.
A loud explosion during the second of the limited-overs internationals was initially claimed by police to have been caused by an electric transformer in an apparent bid to avoid panic among the more than 20,000 spectators inside Gaddafi Stadium.
Information Minister Pervez Rashid later told local television that a policeman had died after a suicide bomber blew himself up just a kilometre from the venue.
Lahore police managed to convince Zimbabwe team management and its players to play the final ODI in the city.
Security was beefed up for Sunday’s match and spectators had a walk of around 2.5 kilometres to reach the stadium after passing through at least 10 security checkpoints.
More than 4,000 policemen and security officers were deployed to shield the entire Zimbabwe squad throughout its stay in Lahore before the visitors flew home just hours after the end of the last ODI on Sunday.
It was a relatively calm departure for the visiting team. Unlike the exit for the Sri Lankan team in March 2009, when gunmen attacked the team bus on the way to the stadium, killing six police officers and a van driver, and wounding several players.
Before the PCB convinced Zimbabwe to tour and help revive international cricket in Pakistan, the Pakistan team was forced to use the United Arab Emirates for its home matches against the West Indies, Australia, England, New Zealand, Sri Lanka and South Africa.
The Zimbabwe tour was also put in doubt after dozens of people died when militants attacked religious minority Shiite Muslims on a bus in the southern port city of Karachi.Advertisement

PCB chairman Shaharyar Khan spoke regularly with his Zimbabwe Cricket counterpart Wilson Manase to assure him of security arrangements in Lahore.
“Pakistan invited us in good faith and they have taken all the necessary security precautions,” said ZC managing director Alistair Campbell said Sunday. “They beefed up the security and we were told that this is better than that given to a head of state.”
Although the Zimbabwe team was confined to its hotel during its stay in Lahore, except for matches and training sessions at Gaddafi Stadium, Campbell said it didn’t affect the players.
“From the moment the Zimbabweans touched down to when they (left) there were the utmost precautions taken without compromising too much on their freedom moving in their hotels,” he said.
Capacity crowds of 27,000 at Gaddafi Stadium, holding placards with slogans like “we are a peaceful nation, we are not terrorists” have reflected the Pakistan fans’ hunger for international cricket.
“It has a huge positive knock on effect, not just for us as cricketers, but also for the people of this country, particularly in Lahore,” said Australian-born Zimbabwe coach Dav Whatmore, who coached Pakistan for two years before his contract ended last year.
“If we’re able to bring a lot of joy and happiness to the masses, which I strongly believe we have done, then that’s a very good thing.”
Sri Lanka Cricket interim committee chief Sidath Wettimuny watched Sunday’s match in Lahore and was impressed with the security arrangements put in place for Zimbabwe team.
“Obviously the security I have seen is very good, it’s all about perception,” Wettimuny told reporters. “Ultimately players have to be comfortable with what they want to do.”
Wettimuny said he would talk to his cricket board officials and his players but wasn’t sure when Sri Lanka would play in Pakistan.
“It’s too early for me to say anything on it,” he said. “When I will go back, I will talk to my cricket board, speak to the players and then take it from there.”