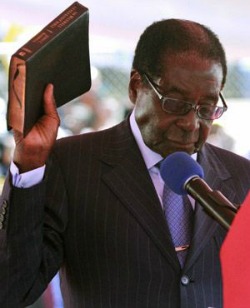 Overview
The July 2013 election victory of the Zimbabwe African National Union-Patriotic Front ZANU PF failed to secure broad-based legitimacy for President Robert Mugabe, provide a foundation for fixing the economy, or normalise external relations. A year on, the country faces multiple social and economic problems, spawned by endemic governance failures and compounded by a debilitating ruling party succession crisis.
Both ZANU PF and the Movement for Democratic Change-Tsvangirai (MDC-T) are embroiled in major internal power struggles that distract from addressing the corrosion of the social and economic fabric. Zimbabwe is an insolvent and failing state, its politics zero sum, its institutions hollowing out, and its once vibrant economy moribund. A major culture change is needed among political elites, as well as commitment to national as opposed to partisan and personal interests.
Despite visibly waning capacities, 90-year-old Robert Mugabe shows no sign of wanting to leave office. The succession battle within his party is presented as a two-way race between Vice President Joice Mujuru and Justice Minister Emmerson Mnangagwa, but the reality is more complex. Public battles have intensified, with intimidation and violence a disquieting feature. Mugabe’s diminished ability to manage this discord will be severely tested ahead of its December National People’s Congress. The elevation of First Lady Grace Mugabe to head ZANU PF’s women’s league has complicated succession dynamics further.
Key economic sectors contracted in the past year and the government struggles to pay wages and provide basic services. Without major budgetary support it cannot deliver on election promises. Deals with China to improve infrastructure provide some respite, but will not resolve immediate challenges. International support from both East and West would help to maximise recovery prospects. Options are limited by acute liquidity constraints, policy incoherence, corruption and mismanagement. Vigorous reforms are needed to foster sustainable, inclusive growth.
Neither the government, nor the opposition has a plan the country is willing to rally behind. ZANU PF’s Zimbabwe Agenda for Sustainable Socio-Economic Trans- formation (ZimAsset) is predicated on populist election promises and wishful thinking. The government has squeezed the beleaguered tax base further, securing limited fiscal remedy and generating resentment. The MDC-T and other opposition parties are sidelined. Their cachet with international players has been severely dented. Prospects for a common opposition agenda are remote, as is any chance of inclusive national dialogue to map the way forward. For the first time since 2007, the MDC-T is suggesting mass protest is a real option, but if past performance is any indicator, ZANU PF will redeploy security forces when required.Advertisement

ZANUPF’s election victory created opportunities for domestic and international rapprochement. International financial institutions are engaging, albeit tentatively, as the government explores financing options. Donors must balance commitments to rebuilding relations with the government, with support for improved governance and tackling democratic deficits. Trust is affected by uncertainties around unimplemented reforms and commitment to the new constitution and the rule of law, concerns about policies, and anxieties around succession. Some in ZANU PF now admit that a new tack is required. Mugabe took over as chair of the Southern African Development Community (SADC) in August 2014 and will chair the African Union (AU) from early 2015. This offers an unprecedented platform to secure some positive aspects of his legacy, though he is unlikely to use this as an opportunity for rapprochement.
To avoid prolonged uncertainty and possible crisis, ZANU PF should:
decide conclusively at its December congress who will replace President Mugabe were he to be incapacitated or to decide not to seek re-election in 2018;
seek to rebuild trust and collaborations with domestic and international constituencies by (i) holding an inclusive national dialogue with the opposition and civil society on political, social and economic reforms; and (ii) clarify and act on key policy areas, eg, indigenisation, land reform and the rule of law, as well as anti- corruption initiatives; and
discipline members who engage in voter intimidation, fraud or other offences.
The political opposition, needing to reestablish its credibility, should:

establish a consultative mechanism, in conjunction with civil society, that seeks consensus and dialogue across the political spectrum on priority – in particular economic and governance – reforms; and
review 2013 election flaws through a forward-looking agenda that addresses major concerns projected for the 2018 polls (ie, voters roll and anomalies in electoral legislative amendments).

The SADC and AU should:

encourage Zimbabwe’s government to promote political inclusiveness and policy coherence in efforts to resuscitate the economy.

Countries implementing sanctions andother measures against Zimbabwe (ie, the EU, U.S. and Australia) should promote a coherent position that:

clarifies what measures the government should take to expedite removal of re- maining sanctions;
consolidates re-engagement and development support contingent on progress with economic and governance reforms;
takes visible steps to strengthen democracy-supporting institutions, including an independent judiciary and human rights and election institutions, as well as sup- port civil society’s capacity to monitor and protect constitutional rights.