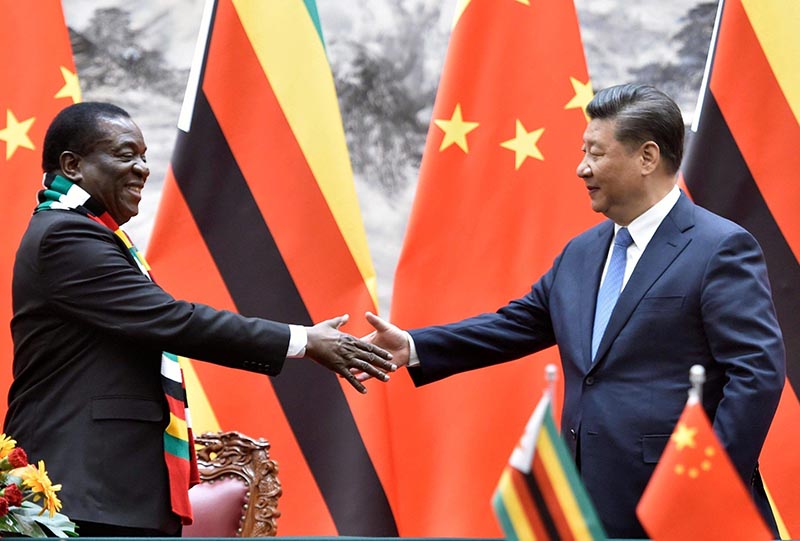 ZIMBABWE is hungry for more Chinese investment and is looking to shore up its currency by leaning on the Chinese currency, in addition to submitting proposals for project funding under the Asian giant’s Belt and Road Initiative.

“The six projects are in pursuit of capitalising on China’s Belt and Road Initiative across Africa, and it will help boost the economy, especially at this time when we are seeing investment bottlenecks from the traditional Western source markets,” said a Zimbabwe government official, who was part of a committee working on the projects.

He added: “China is willing to come to the party, and we are pursuing this through this initiative, which will essentially see China commit even more funding into the economy.”

The details of the funding proposals have not yet been divulged.

Mnangagwa met Wang in Harare Monday. The Chinese Foreign Affairs Minister was also scheduled to visit a tobacco farm near Harare, with the Asian country among the top buyers of tobacco from Zimbabwe. Tobacco is a major export earner for Zimbabwe, which also exports the green leaf to South Africa.

“He is very happy to visit. We had occasion to go over our relations and he goes back satisfied that our relations are on solid foundation,” Mnangagwa said after meeting Wang.

The Zimbabwean leader’s spokesperson, George Charamba, tweeted Monday that “among projects discussed (by Mnangagwa and Wang) was the Batoka Hydro-Electric Project to be sponsored jointly with Zambia,” and to be executed by Sino-Hydro in partnership with General Electric.

“The project, once completed, will leave Zimbabwe in a power surplus position,” he said.
Zimbabwe is facing a crippling power deficit that is disrupting productivity despite imports of electricity from Eskom and Hydro-Cahora Bassa.

Zimbabwe is also understood to be pursuing currency back-up from China, as its monetary reforms falter through value losses on the back of waning confidence and little productive support for the local unit.
Wang said after meeting Mnangagwa that China understood the challenges that Zimbabwe – battling to turn around its economy since Mnangagwa elbowed out Mugabe in 2019 – was facing.

“China understands the current bottlenecks and difficulties faced by Zimbabwe, but we trust that Zimbabwe has the wisdom and capabilities to address well these challenges,” Wang said.

Chinese investment comes as other BRICS countries are also expanding investments in Zimbabwe, with Russia’s Alrosa signing agreements for a joint venture project to mine diamonds in the Chiadzwa area.

Russia also has a large platinum project at Darwendale, although the project appears to have been delayed in the past year because of shareholding disputes.

China has massive investments in Zimbabwe, including ferrochrome, electricity generation and infrastructure funding projects, such as the expansion of the Robert Gabriel Mugabe International Airport.