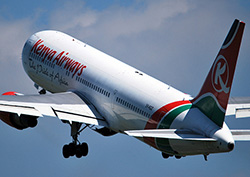 HARARE: Zimbabwean tourism authority have said the start of direct flights from Nairobi to Victoria Falls by Kenyan Airways will boost arrivals in the resort town.
Kenyan Airways starts flying into Victoria Fallsthis May. In a statement, Zimbabwe Council for Tourism president Tich Hwingwiri said the tourism sector was delighted by the development, state media New Ziana reported.
“Existing and longstanding services by South African Airways, Comair, Air Zimbabwe, Fastjet Zimbabwe, and Air Namibia continue to be offered, and we are grateful to these airlines for the confidence they have shown in the destination over a long period of time,” Hwingwiri said.
Hwingwiri said more international airlines would fly into Victoria Falls.
“It is our hope that Victoria Falls will become one of the most important air service destinations in Africa, acting as a stimulus for further development of facilities for leisure and conference travelers,” he said.
The Victoria Falls International Airport was upgraded by China Jiangsu International to a passenger handling capacity of 2 million per year, up from the previous 500,000. The upgrade, which began in 2013, was financed through a 150 million U.S. dollar loan from the Export-Import Bank of China.
President Robert Mugabe commissioned the newly upgraded airport in November 2016, but part of the infrastructure such as the international terminal, runway and control tower had already become operational by December 2015.
The government hopes that the upgrading and expansion of the airport will attract more international airlines and bring more tourists to Zimbabwe’s prime tourist destination and one of the seven natural wonders of the world — the Victoria Falls.Advertisement