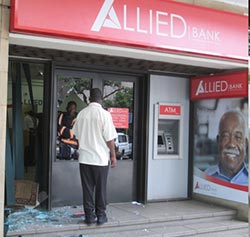 IT WAS meant to be the stroke of genius that would open up banking in all its glamour and glitz to indigenous Zimbabweans.
The liberalisation of Zimbabwe`s economy and financial sector in the 1990s saw the emergence of a new wave of indigenous bankers to the pinnacle of the highly lucrative sector. These reforms entailed the removal of market segmentation and greatly facilitated this influx of local players into the market. And, for a while, liberalisation worked like a charm and local banks prospered. Then it all went horribly pear shaped.
The failures of banks such as United Merchant Bank owned by Roger Boka and Universal Merchant Bank would only serve to be precursors to the monumental banking crisis of 2003-04 – arguably the most devastating to have ever affected the country. Such was the enormity of this crisis, that by the end of 2004, ten banking institutions had been placed under curatorship, two were under liquidation, and one discount house had been closed. During this period, for Zimbabwe`s banking sector, not only had the proverbial wheel fallen off, but so too had the axles and suspension. Locally owned banks were left exposed and the sight was not pretty!
But the woes of Indigenous banks did not stop there. Since the 2003-04 banking meltdown to date, there has been at least on average one banking sector crisis every year since then. Even with the introduction of the multi-currency system, locally owned banks have been under the cosh, with Renaissance Merchant Bank, Interfin Bank and Royal Bank being some of the banks that have gone under.
And in 2015, this negative trend seems to show no signs of abating, with two indigenous banks having closed down just a little under 60 days into the year; AfrAsia Bank Limited (formally known as Kingdom Bank) being the latest in a growing list of casualties. The bank was formerly owned by Nigel Chanakira, now chairperson of the Zimbabwe Investment Authority and, not too long ago, was the focal point of a fight for control between John Moxon, Meikles Limited executive chairman, and Chanakira, as the fruits of a failed merger came to bear.
To the observant onlooker, Zimbabwe has still not seen the last of indigenous bank closures. “Beware the Ides of March” seems to be the chatter on the street, as most analysts reckon a couple of more local banks will likely experience similar fates to those that have shut-up shop. Already, Tetrad Investment Bank has been placed under provisional judicial management, although many see this as just delaying the inevitable, especially considering that such interventions have not worked for other banks in the past.Advertisement

Why has it only been the scalps of locally owned banks that have recurrently been claimed in the Zimbabwean banking market? After all, foreign-owned banks are also operating in a similar environment, ostensibly facing the same challenges indigenous banks face daily.
Has the central bank been eating its own children?
The Reserve Bank of Zimbabwe – particularly during the tenure of former governor Gideon Gono – has been on the receiving end of numerous attacks on the way it has been regulating the banking sector. Could the deficient and ineffective supervision of the central bank be to blame?
In his book Entrepreneurship on Trial, Zimbabwean authorDr Tawafadza Makoni lays the blame of the crisis of 2003-04 squarely at the doorstep of the Reserve Bank.  He cites such factors as the punitive overnight central bank accommodation at 400% per annum that was introduced, forced CEO departures and some stringent requirements to surrender tradable securities to central bank as well as hikes in the statutory reserves requirements for commercial banks, in the face of tightening liquidity as some of the contributory factors.
Evidence of weak supervision and monitoring by the Reserve Bank of Zimbabwe was also brought to the fore in 2011 when it emerged that Renaissance Merchant Bank had used illegal debt for equity arrangements to comply with capital adequacy requirements. This added to the fact that two shareholders owned about 70% of the bank against central bank requirements that no single shareholder should own more than 10%. It seems that this blatant disregard for regulations by local banks only comes to light when it is already too late, perhaps implying an ineffective market regulator.
Macro-economic challenges
That Zimbabwe has undergone a protracted period of great economic distress is no secret. Therefore, could these smaller, often yet to be solidly established institutions be expected to do well, let alone survive when they face negative headwinds in the economy as well as competition from foreign players? Undoubtedly, adverse macro-economic conditions have contributed to the problems of indigenous banks.
In fact, bank failures are more likely in countries that exhibit greater macro-economic instability as their earning power is significantly curtailed by factors such as high inflation, unemployment, slowing GDP growth and negative Balance of Payments positions. All these are realities Zimbabwe has faced in recent times. However, most of the foreign banks operating in Zimbabwe have also faced the same challenges, and have emerged relatively unscathed from, unlike their locally owned counterparts.
Or could it simply be a case of natural selection where market mechanisms work to weed out the weaklings and ensure that only the stronger and solid banking institutions remain? If this is so, then bank failures will continue until the appropriate number of banks remains. And, if past occurrences are anything to go by, then foreign owned banks need not worry.
Incompetent local management
This would be rather ironic, especially given the clamours for Zimbabwe`s banking sector to be indigenised, over the years. The Reserve Bank of Zimbabwe has for instance insisted that, rapid and ill-planned expansion drives not synchronized with the overall strategic initiatives of the institutions concerned have exposed some institutions to greater risk of loss. Other indicators of ill-equipped management, perhaps, have in the past come through the way of inadequate risk management systems, undue influence or dominance by a few shareholders, poor corporate governance structures and improperly constituted board structures.
Related party insider lending is also another manifestation of incompetence. Historically, some banking institutions disregarded set prudential lending limits notably to insiders and related parties. In some cases, interest was not charged on insider loans and the loans were eventually written off without board approval, and this contributed to their failure.
At a time when the financial services sector is taking shape in Africa, and locally owned banks such as Togo`s Ecobank, Kenya`s Equity Bank and First Bank in Nigeria are rising to the pinnacle of the banking industry on the continent, Zimbabwe seems to have been blown by its own petard. Its efforts to encourage indigenous players in the banking sector have backfired and it appears Zimbabwe is one country where indigenous banks will just not prosper, let alone survive.