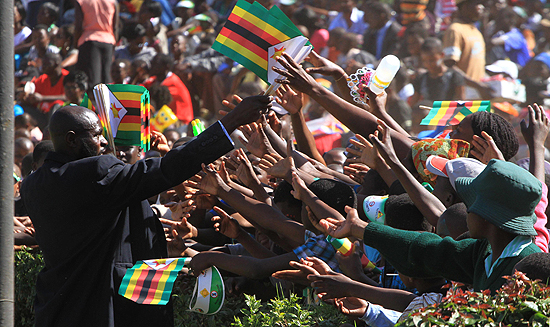 IT’S a carnage; it has always threatened to be one. Across the board, there is a general feeling of capitulation. The marauding political forces mercilessly created this economic mess, inadvertently condemning a people to the bottom of human development. With businesses facing viability problems, rampant unemployment, a worsening import bill, liquidity crisis, bloated government expenditure, and a lethargic government response, among others, there is hardly any true economic news or metric that looks positive these days.
Why capitulation? With no policy tool from government that’s working to spark economic recovery, combined with its seemingly inherent unwillingness to be pragmatic even when faced with a mountain of election promises to deliver, what can only be seen and heard are brave faces and unending rhetoric respectively.
Diaspora remittances, market-gardening/farming, artisanal mining and vending may have saved the day for many, however the latter two face headwinds of a plunged gold price and the teething issues of failing to attract customers to new vendor-designated areas respectively. The recent spate of job layoffs summed up the severity of the carnage. But make no mistake, the opulence and profligacy of the few whose number has however diminished, still exists.
The above is an account of what is observable when one begins a search for reasons and answers to a failed economic take-off. But why do African countries fail to advance their economies? Rather why do we fail as Zimbabwe? I have conversed with many people on this issue and the same old themes come to the fore; corruption, greed and incompetence. But surely there is more to it than this.
Our backgrounds may influence a lot of what we value most but our mindset is king. The good thing with mindset is that we can choose the kind we want to instill in ourselves. Take for example an elder politician who struggled to afford an education in the colonial days and suffered the prejudices that prevailed in those days before taking up arms to fight in the war of liberation. With such a background the mindset is likely to be inclined towards improving the lot of the previously disadvantaged. In all fairness, that mindset served us well in the 1980s in speedily bringing health facilities and schools to communities that lacked them.Advertisement

However the development train should not have been parked there. Mindsets needed to shift with time to allow for a rapid economic advancement. A change of mindsets has manifestly failed to happen thus far. The pre-occupation gradually became that of looting, accumulating, hoarding and fiercely investing in defending political strongholds. This was achieved at a massive cost to economic advancement which halted and backtracked. Meanwhile, after the 2007 global financial crisis, the global economy has not stopped surging ahead and only the pragmatic have kept pace.
The mathematics should have been as follows:

Productivity is/equals the economy, as we can have all the land we want and evidently still have no economy to talk of.
A legacy mindset plus a pragmatic approach to policy plus focused execution of programmes/projects minus corruption, equals robust and sustainable economic advancement.

Without these, it is not possible for government to pull off an economic turnaround in a life time. That said, all hope is not lost as political metamorphosis is still possible. Deng Xiaoping, the visionary of China’s economic miracle, not only looked at Singapore with admiration, but he read the tea leaves of the global economic trends well enough to have embarked on such a radical shift to a legacy mindset which saw the beginning of a rising China. He was honest enough to admit that a change to pragmatic policies was necessary to move the economy forward.
As a country we fail because we no longer have the legacy mindset and therefore lack the zeal for long term planning and execution of economic programmes. The trend of failure to execute major developmental programmes after elections has long been a major hindrance to our economic advancement. A basic way of looking at this would be to ask anyone this question: How many new railway tracks and power plants were constructed since independence? The answer that is often given is that we did not have the financial resources to build any. We fail because we are not innovative and we lack the desire to create and make things for ourselves.
And, why did the country’s electricity generation capacity diminish to about 1,200 MW from a peak of about 2,300MW? It was because we failed to adhere to strict repairs and maintenance programmes of the existing infrastructure. Literally, we ran down the infrastructure while mindlessly focusing on unproductive politics and chanting slogans. It’s the same sad story with roads and rail.
With a history of announcing mega projects which never see the light of day such as Harare-Chitungwiza commuter train, Beitbridge-Chirundu highway dualisation and recently Essar NewZim Steel among many, government’s track record of failing to bring infrastructure projects to fruition is legendary. We fail because we are full of rhetoric, we are not pragmatic and we lack commitment and do not value the truth. Policies that attract investment in major developmental projects which create mass employment are far better than policies that are only focused at giving cronies ownership of assets which they cannot develop or make productive use of.
We have an exaggerated victim mentality in which we continue to blame colonialism and West-imposed sanctions for many of our shortfalls. This is preventing us from correcting our own significant shortfalls in governance. We need to redefine the hero status and not only limit it to those who expedited political goals but also include those innovative individuals whose businesses, projects and research spurred economic development and scientific inquiry, discovery and knowledge.
Lee Kuan Yew, the founder of Singapore was a visionary and an anti-corruption protagonist who long realized that self-rule without economic advancement was of little value. Such visionaries put their countries’ economic advancement first before personal interests. Many students from Asian countries who graduated abroad at top Western universities and gained experience working for Western companies, had one thing in mind; to bring home their knowledge and skills and develop their home country. Zimbabwean students and professionals who go to study and work abroad seek to permanently live and work there – not that they dislike their home country, but the economic conditions back home are not getting any better.
Despite boasting of local universities that have produced hordes of engineers, technicians, scientists including biotechnologists, chemists, agronomists among others, we are neither building enough roads, dams, mines, factories, machinery nor producing competitively priced food and many ordinary goods. Instead we look forward to our Santa Claus, China to come and do it for us. Again we fail because we cannot make our talent flourish in our own backyard. We frustrate our own talent by unleashing clueless and corrupt politicians to lead them. We lack the vision to build a strong economy. And we are quick to beg for aid which makes us lazy.
Menacing greed and corruption have accelerated our economic downturn. As if by decree, many politicians demand and tend to get a better and bigger share of everything, without lifting a finger. And sadly, such people usually lack innovativeness or competence to viably advance projects to world class level for the benefit of the country. What has been mastered is the ability to loot, accumulate and hoard. We fail because of greed and corruption.
If, for example, it costs two to three times more to grow wheat in Zimbabwe than importing it from Ukraine, why not import it then until we get our electricity/energy costs economical? We fail because we don’t think of project economics, we think politics and slogans. Politicians in government have generally performed dismally and have a lot of practical economics lessons to learn from local vendors (no pun intended). It now appears that any project that has a heavy dosage of politics is doomed to fail in this country.
To move the economy forward we must adopt a legacy mindset, think long term, shun corruption, roll up our sleeves and execute economic development programmes with ruthless efficiency. The starting point should have been the four pillars: – Infrastructure and Utilities; Value Addition and Beneficiation; Food Security and Nutrition; and Social Services and Poverty Eradication. For us to turn a corner, these pillars should best be headed by capable professionals and technocrats.
Noel T Ngangira writes in his personal capacity and can be contacted at ntngangira@gmail.com