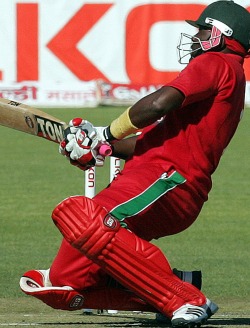 HAMILTON Masakadza has said that his side will go for broke in the third and final Test in Chittagong.
Zimbabwe have already lost the three-match Test series after defeats in Mirpur and Khulna and have also dropped below Bangladesh in the ICC Test rankings.
“Obviously [we would] go all out for the win and go out for the one-dayers,” Masakadza said.
“We haven’t really won a Test match in Bangladesh for a long time. So that will be something we will be looking forward to.
“It is obviously one of our aims to win this last one and end up 2-1 and get into the one-day series with a little bit of momentum.”
For that to happen, the team will require Masakadza to carry his form and big scores from the second Test. He made 158 and 61 in Khulna, even as most of the other Zimbabwe batsmen crumbled against spin.
Although he made 13 and 5 in the first Test in Mirpur, his knocks in the second game have made him the top run-getter in the series so far, with 237 runs at an average of 59.25.
Masakadza felt that the conditions have contributed to Zimbabwe’s fruitless showing in the first two Tests, despite better performances against stronger opposition at home a few months earlier.
“I think it’s just the conditions. It’s different from back home. It’s a different game playing against the Australians and South Africans.
“We played on pretty similar wickets but our spinners out-bowled their spinners. That hasn’t been the case here. So I think it’s just the conditions,” he said.
Masakadza also emphasised the importance of taking full advantage of a good start, which he did well in Khulna.
Zimbabwe’s batsmen had trained to counter spin during their preparatory camp before the tour but many haven’t applied those lessons as well as Masakadza.
“I didn’t make too many adjustments but just backed the preparations I had at home,” he said.
“I didn’t really bat for too long in Dhaka. I just wanted to make sure that I got a start and continue to build on something.
“I think it is just a continuation of what we did back home. A lot of the batters worked on different specific things, including coming down the track.
“It’s just a matter of the guys getting the confidence, taking it out tomorrow and believing in themselves.”Advertisement

Masakadza conceded that the series has been a struggle for the Zimbabwe batsmen, but believed luck also played a big part.
“I think the spinners have bowled really well. It has been a big struggle for us, including me. Sometimes it happens on the day that the ball gets past the outside edge,” he said.
“On another day, the first one that does could take your nick. I don’t think that I have played that much better than my team-mates, it was just my day and I managed to carry through for my team. I am confident that the guys can bounce back.”