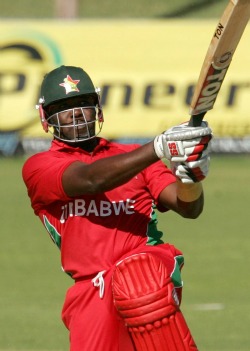 Zimbabwe 168-5 (Masakadza 59) beat
Bangladesh 162-8 (Shakib 65) by 6 runs
ZIMBABWE stretched their winning streak against Bangladesh to three matches by prevailing in a tense opening T20 International in Bulawayo.
Their impressive total of 168 for five was built on the back of a fine second-wicket stand of 74 between Brendan Taylor and Hamilton Masakadza, while their bowlers kept plugging away despite the Bangladeshi pair of Shakib Al Hasan and Shamsur Rahman putting on a substantial second-wicket stand of their own.
Bangladesh lost Tamim Iqbal two balls into their run chase, but Shakib and Shamsur looked to have done enough to take them to a relatively comfortable win. However, the rest of their middle-order imploded against a disciplined Zimbabwe attack.
Shamsur and Shakib both passed 50 during their second-wicket partnership of 118 in 14 overs and had taken their side to within sight of victory. When Shakib was caught off Prosper Utseya for a superb 65 off only 40 balls, Bangladesh needed just 49 more from 33 balls with eight wickets in hand.
However, Shamsur fell two balls after Shakib for 53 off 48 balls and was the second man to fall in a collapse that read seven for 42 in 33 balls.
Departing captain Mushfiqur Rahim did his best with a sprightly 28 off 14 balls, but he was the caught off the first ball of an excellent final over bowled by debutant Tinashe Panyangara.
With 10 needed off the last six balls, Panyangara not only dismissed Rahim, but conceded three runs off the next four balls before wrapping up the win by trapping Abdur Razzak leg-before from the final delivery.
Zimbabwe’s bowling attack had bowled tidily throughout, with Brian Vitori again impressing first up and returning figures of one for 24 from his four overs.
Utseya (two for 34), Panyangara (three for 32) and Tino Mutombodzi (none for 33) were also impressive, with only Tendai Chatara even remotely wayward, conceding 30 runs from three wicket-less overs.
Taylor and Masakadza had earlier helped Zimbabwe rebuild after they had lost Vusi Sibanda third ball. They added 74 in eight overs to set their side on course for a total of around 180. Bangladesh’s spinners, though, plugged away and ensured that it was kept to manageable proportions.Advertisement

Shakib preceded his knock with the bat by taking two for 20 from four overs – dismissing both Taylor (40 off 25 balls) and Masakadza (59 off 48) – while Sohag Gazi took one for 28.
Malcolm Waller made sure that there wasn’t then a collapse that would rival Bangladesh’s later one and struck 26 not out off 14 balls to provide the innings with late momentum.
The second and final Twenty20 International in the series – and the final match for Bangladesh on their tour of Zimbabwe – is tomorrow, again in Bulawayo.