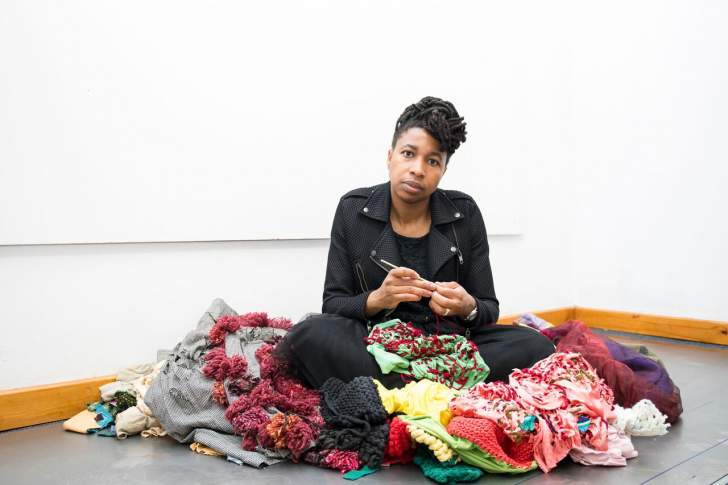 The winner of the $20,000 award will be announced on March 6 with the presentation ceremony set for March 13 in Abidjan, Cote D’ Voire.

Other nominees for the award, conceived by the Goethe Institute and the Grohs family, are Emkal Eyongakpa of Cameroon and Makouvia Kokou Ferdinand of Togo.

The dresses are deconstructed and, at times, reconstructed to find new ways of giving tribute to and reflection upon the person that owned the original garment.

The award recognises the lifetime achievements of the former Head of the Goethe-Institute in Abidjan, Henrike Grohs, who was killed on 13 March 2016 in a terrorist attack in Grand-Bassam, Côte d’Ivoire.

It is held twice a year and is dedicated to visual artists who are living and working in.

Members of the jury, who include National Gallery of Zimbabwe Chief Curator, Raphael Chikukwa, said the prize was aimed at “strengthening artists and encouraging them in their quest for a world of togetherness and dialogue”,

Georgina Maxim studied Creative Art and Design and Applied Art and Design at the Chinhoyi University of Technology and works at Gallery Delta Foundation for Art and the Humanities as a Gallery Manager and Assistant in curating 12 to 15 exhibitions a year.

She co-Founded Village Unhu, an open art studio, which is an artist initiative that provides working space and engagement to artists in residency programs, workshops and exhibitions.

Maxim, who is also a volunteer art teacher at a local government school as part of the art education and culture development programme, established and designed by Village Unhu, has permanent collections in Australia and Holland.