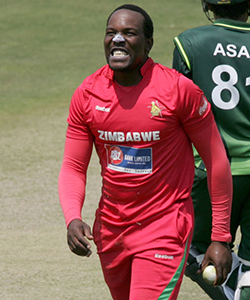 ZIMBABWE’S batsmen failed a test under floodlights and face defeat two days into a three-day warm-up match against a South African Invitation team at Boland Park on Thursday.
Trailing by 91 runs after test batsman Temba Bavuma hit a fluent 70 off 77 balls in the Invitation team’s first innings, the Zimbabweans struggled to 120 for seven at the close of play, giving them a slender overall lead of 29 runs.
It was hardly the dress rehearsal the tourists wanted ahead of a one-off day-night test against South Africa, starting in Port Elizabeth on Tuesday.
There were 40 overs remaining before the close, all to be bowled under floodlights, when the Zimbabweans started their second innings against a team consisting mainly of players from South Africa’s second tier of first-class cricket.
First innings top-scorer Hamilton Masakadza was bowled by Lizaad Williams off the second ball of the innings. Solomon Mire and Craig Ervine put on 50 for the second wicket but batsmen fell at regular intervals after that pair were separated.
Test bowler Dale Steyn, who tested his fitness in the first innings, did not bowl in the second. Williams led the attack and took three for 27.Advertisement