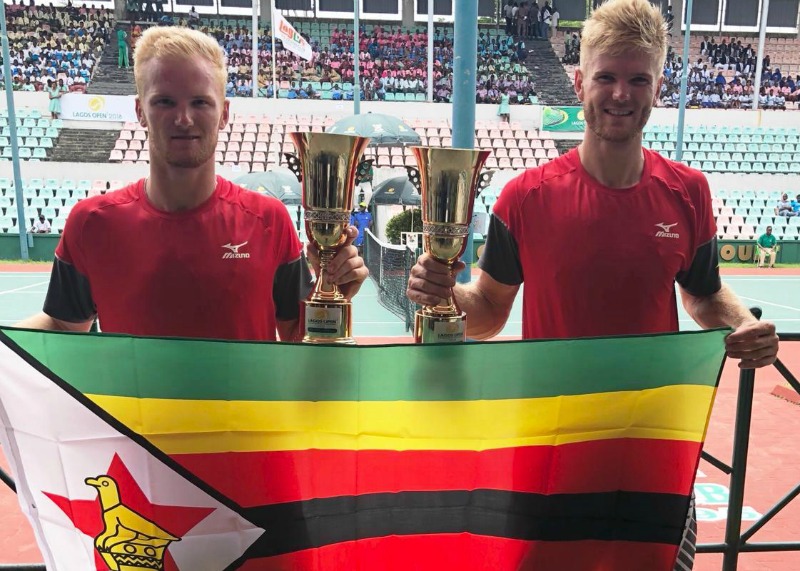 ZIMBABWEAN tennis siblings Benjamin and Courtney Lock captured their sixth team title on the International Tennis Federation (ITF) Futures Circuit after beating France’s Tom Jomby and Alexis Klegou from Benin in the final of the $25,000 Lagos Tennis Open in the Nigeria on Saturday.

Competing in their fourth final as a team this season after winning three successive three successive ITF Futures doubles titles on home soil in June, the Lock brothers recovered from a slow start to win 3-6, 6-4, (10-7).

The players’ father Martin, who is also a former local tennis star and now president of Tennis Zimbabwe expressed his delight for his sons’ achievements in an interview with NewZimbabwe.com.
“I’m really proud of them for making the country proud. This is their fourth title of the season together and this is the biggest they have won so far as a team since it was a $25 000 event compared to the $ 15000 events they have previously won,” he said.

Lock Snr said the pair’s success was good news for Zimbabwe as they are part of the Zimbabwe Davis Cup team which will be hoping for another solid season next year after reaching the second round of Europe/Africa Group II early this year.

“It’s also very good news for the nation since they are both part of our Davis Cup and we hope they will continue to play well and keep improving and hopefully carry the form into next year’s Davis Cup competition.”

The brothers, who are following in the footsteps of the retired legendary brothers Byron and Wayne Black, have been in top form since the start of the year and Friday’s win was their fourth of the season.

Benjamin (25), a former Florida State University student and his young brother Courtney (21), who graduated from the University of Nevada in Las Vegas in Ma, won their first ITF Futures doubles title together in Maputo, Mozambique in 2016.

Since then they have went on to win further titles in Egypt in addition to three successive titles during the Old Mutual Sponsored tournaments on home soil in June.

In total Benjamin has 16 career doubles and four singles titles on the ITF Futures circuit since his maiden win in 2014 while Courtney celebrated his sixth doubles victory Friday.