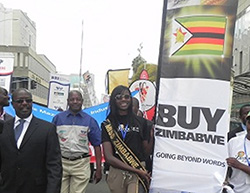 A CONSORTIUM of 500 local companies has launched a community engagement programme to boost sales by encouraging Zimbabweans to purchase local products.
Led by the Buy Zimbabwe campaign, some of the companies involved in the initiative include Pro Brands, N. Richards and Datlabs.
Zimbabwe’s economy has been struggling for years and, in 2008, local shops were empty virtually owing to the lack of meaningful local production, typically preceded by high inflation.
Gradually businesses had lost lines of credit to recapitalise, and there was also limited access to foreign currency to procure required resources.
These challenges all led to substandard goods and services being delivered and a reduction in output, with businesses operating at about 20% of their capacity at the time.
Most Zimbabweans survived through imported goods and, since then, Zimbabweans have shunned local products as they believe they are more expensive than those from neighbouring South Africa, Botswana and Zambia.
Now an initiative has been launched to encourage Zimbabweans to buy local, in the process helping companies and the country’s battered economy recover.
Said Buy Zimbabwe CEO, Munyaradzi Hwengwere: “Local industries have no markets for their products, so it is imperative for communities to buy locally-made products.”
Consumers present at the launch of the programme in Sunningdale, Harare, urged local companies to use their expertise to produce diverse products which are of high standard and well packaged to attract customers.
“Locally-made products are not of high standards in terms of quality and content. They are also expensive too,” said one consumer.
Hwengwere admitted Zimbabwean products were more expensive than those from other countries saying it would take a while before prices become normal due to the economy which is not performing to expected levels.
He added: “The programme would spread to other cities and towns and even rural areas so as to break the barrier between manufacturers and consumers.
“There is an information gap which needs to be filled by both parties involved.”
He said the programme would help consumers to be proud of locally made goods as well as boost the creation of much-needed new jobs.Advertisement