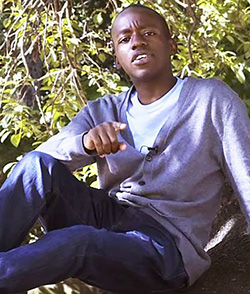 A UNITED States-based Zimbabwean filmmaker has set up an online crowd funding campaign to raise a huge sum of money to produce the first ever African teen movie.
Tatenda Mbudzi, an M.F.A in Film graduate from the University of Carlifornia, Los Angeles (UCLA) wants to use the movie aptly titled, Zim High, to change the world’s attitude about Africa and portray his country of birth, Zimbabwe, in a positive light.
In an interview with an American online publication, Take Part, the 28 year old Mbudzi, who has worked with some of the major Hollywood studios, among them Universal Pictures and Focus Pictures, said he was inspired to produce a film where the audience will “not look at as some place where people are only  starving, suffering or dying.”
To make his dream come true, Mbudzi needs $70,000 to cover the expenses of the production, which will be shot in Zimbabwe.
So far his online crowd funding campaign on Indiegogo, has raised $4,722 in one month since it was launched.
The money will cover cast and crew payments, food and transport, production gear rental, production design and costume design, perks, Indiegogo, Paypal and National registration fees; digital storage, graphics, still photography and electronic press kit and also film festival entry fees.
“It’s the first African teen movie ever that isn’t about Ebola, Somalian pirates, pregnancy, or random black guys with AK-47s.
“It’s about self-acceptance and standing up for yourself and your dreams in the harshest of environments,” Mbudzi said.
Mbudzi who assumes multiple roles in the production as the writer, director and lead actor, says he was inspired to tell his story to cast light on growing up as a teenager in post-colonial Zimbabwe.
“I was inspired to tell this story because being a dreamer is hard, especially in an environment like Zimbabwe, where the economy and cultural mind-set don’t really support people in the arts,” Mbudzi told Take Part.
“I was also sick of seeing movies—teen movies especially—that use Africa as a backdrop or setup for some morally absolving adventure.
“I wanted to make something from an African and Zimbabwean perspective for a change. Also, being a Zimbabwean teen in a postcolonial environment was tough, physically and mentally.
“There were bullies, and there were unwritten rules and attitudes that I only noticed after I left the country.Advertisement

“I wanted to dissect how Zimbabwean young people come up with a worldview that dictates who they socialise with, who they date—interracial dating is very rare—and what they end up doing with their lives.”
Zim High, a semiautobiographical dark comedy, is about a 17-year-old loser, Tatenda, who desperately needs to be a prefect —an all-powerful student leader —so he can win scholarship money to study anime in Japan.
When he gets framed in a near fatal bullying incident, he has to turn to an aboriginal Australian new kid to help him be cool and cruel enough to become a prefect.