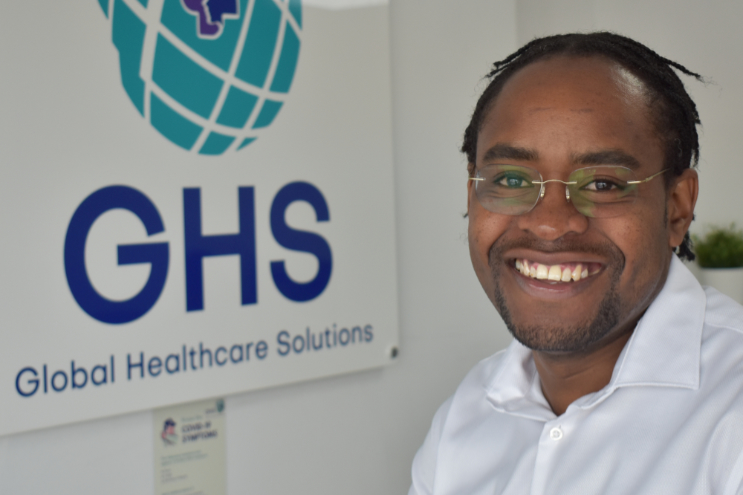 BY any standards it’s quite an achievement.

And all within the space of just ten years. Barney Kavai arrived in this country in 2010 as a refugee. Just a few pounds to his name. The Zimbabwean, then aged 24, was determined to succeed in his adopted homeland.

He already had a BSc in Computer Science after studying in Belgium.

Barney went on to achieve his MBA in Strategy/Entrepreneurship Management from Bournemouth University. But his real ambition was to start his own business.

In 2013 he founded BMK Management, a boutique consultancy promoting sustainable entrepreneurship in sports, culture and the creative sectors. The big move, though, came in November 2018 when his new venture, Global Healthcare Solutions (GHS) started trading.

Today the Bournemouth-based group employs more than 60 office and support staff and has three companies under the GHS banner – care, cleaning and medical supplies. Combined revenue for GHS and BKM Management in the last 18 months is more than £1m.

But it’s just the beginning.

Barney, 34, who is married to Luzia with a daughter, Liana, aged three, is determined to expand the business across the UK and then further afield.

He said: “I want to create employment and bring in people with great entrepreneurial skills and talent. “I’m so proud of the people working for me but I know there are many more who would benefit from the way we work here.

“This country – my country – has empowered me and now I want to help others.”

As well as his businesses, Barney is a Board Member of Dorset Race Equality Council. He also sits on the Board of the International Care Network. And, for the last seven years, Barney has chaired the RIZE (Revolutionary Independent Zimbabwe Entrepreneurs) Organisation.

Founded by Barney in 2013, the social enterprise specifically targets young people in Zimbabwe, South Africa and other locations. It aims to promote self-belief, unity and creative entrepreneurship among young people through education, empowerment and leadership.

“They’re things I care passionately about and believe I can make a difference,” said Barney.

Among the people coaching and mentoring Barney is Sarah Ali Choudhury, the high-profile Dorset businesswoman and chef, pictured right.

She said: “Barney is a distinctive and highly successful entrepreneur.

“As well as being a businessman, he spends his spare time invested in making ambassadors out of today’s youth and is very involved in artists, art and culture.

“Barney reaches out to young people, keeping them focused on doing good and is truly bridging the generational gap.
He’s also an exceptional leader and it’s high time there was a role model from such a diverse background.
Barney has experienced more than most individuals as he went from refugee status to a pioneer and leader who is creating job opportunities and improving skills for life for individuals.

“Working with Barney is an incredible honour for me because his values, goals and passion are completely aligned.
He is a brilliant businessman and has the ability to give each and every individual – be it employee or a youth that he’s helping – the time to find their top qualities and to bring the best out in themselves and in others too.

“Although Barney is doing these amazing things, and creating change and opportunities for so many people, he is so modest. He doesn’t self-praise and, with whatever he does, there is no ego involved. That’s something not seen very often in today’s world.”