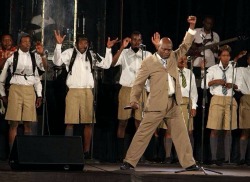 LOCAL inter-denominational gospel choir Xtreme Afrique Sunday lifted the esteemed Africa Golden Virtual Award in Canada.
Xtreme Afrique is made up of members from Celebration centre and Zimpraise choir members. It was formed in 2013 and moulded around the South African Joyous Celebration choir.
Local household names such as Bethany Pasinawako, Agatha Murunzwa, Mathias Mhere, Innocent Shumbahuru and Rumbidzai Zvirikuzhe are part of the group.
The award ceremony was also broadcast live on Africa Ahead Web TV.
The choir was nominated in the Best Group African category.
Spokesperson, Laiton Ngolomi, who is also the group’s producer, told NewZimbabwe.com that they are yet to contain their joy after winning the award.
“Just to be the best choir in Africa make us proud and also that prayer and hard work helped us through.
“And, with the groups that we were competing with, who are big and renowned groups in music, we have shown we can compete and beat the best in the world of music.
“And remember we were the only gospel choir from this part of the world.”
He also paid tribute to their fans for voting in numbers and supporting the group.
In their category, Xtreme Afrique beat other household names such as chorale Notre Dame La Salette (Gabon) Lara George (Nigeria) and Label (Cameron).
Angola took the Best Male Southern Africa award won by Anselmo Cordeiro.
From Africa, other winners were Fabrigas Le Metis who won Best Male central Africa (Congo) and Best Male Artiste award was won by Nathalei Makoma (Congo).
Yemi Alande won the Best African Artiste and Best Female Artiste awards.
Advertisement