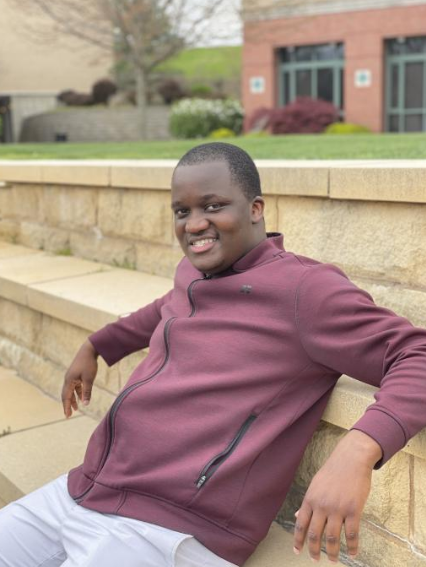 FAIRMONT: The only thing Tafara Ushendibaba knew about Fairmont State University before he enrolled was what his siblings had told him.

His older brother Tatenda and older sister Tendai vouched for the school after making their way from their homeland of Zimbabwe years prior to get an education at the Locust Avenue campus.

“My siblings put in a good recommendation,” Ushendibaba said.

During this weekend’s commencement exercises, Ushendibaba will graduate with a business degree in information systems.

“When I came here to Fairmont State, it was my first time in the country. After seeing the United States in pictures or in movies, I expected a place like New York City,” he said. “To my surprise, Fairmont was the total opposite, but it ended up becoming a place I really enjoy and holds a memorable place in my heart.”

Ushendibaba said he immersed himself at the university and pursued a position as a resident assistant in one of the college residence halls. Ushendibaba spent his first semester as an RA in Bryant Place before moving to University Terrace, where he has lived and worked for the past three years.

“The RA position was an opportunity for me to learn more about people in America from a student point of view,” he said. “Having come far away from home, being an RA enabled me to learn, grow and work on a team. It has given me independence and the chance to provide a safe living learning environment for residents. To me, it’s not just a job; it comes from my heart and my desire to help other students.”

He also joined Chi Alpha, a student organization focused on worship and fellowship. He said Chi Alpha allowed him to grow in his faith while also exploring the country. While at Fairmont State, Ushendibaba participated in a weekend retreat in Washington, D.C. and went on a spring break mission trip to Niagara Falls.

“I had a really fun time doing missionary work and spreading the gospel while hanging out with my friends,” he said.

Ushendibaba also did everything from exploring West Virginia state parks to playing pick-up soccer games in the Falcon Center. He also learned the value of finding quiet near the fountain in the campus quad.

He said he gained valuable experience serving as a tech commons worker, which allowed him to apply what he was learning in class.

“It’s a field I’m really passionate about,” Ushendibaba said. “I’m interested in the impact of implementing technology into an organization, and I’ve had experiences with that both in class and from the work I do at the student help desk.”

As he preps for own personal ‘mountaintop experience’ in the Mountain State by turning his tassel this weekend, he encourages future students to stay focused.

“Have fun, but remember what you’re here for,” he said. “Get good grades and earn some work experience. These four years will determine how far you go in the long run, so plan wisely.”

About 400 students will receive their diplomas in ceremonies that began Friday and run through Sunday.

It begins at 9 a.m. Saturday, with the School of Nursing Commencement and Pinning Ceremony. At Noon, graduates from the School of Education, Health & Human Performance and Regents Bachelor of Arts will have their commencement ceremony.

And, on Sunday, commencement begins at Noon for the College of Liberal Arts and at 3 p.m., students from the School of Business and Aviation will have their commencement.