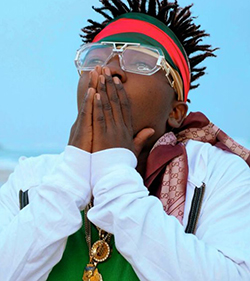 ZIMBABWEAN hip-hop star Jimmie Maleta has teamed up with two continental artists to tackle corruption in Africa through music.
Maleta, who is based in South Africa, teamed up with Livien Mugenzi, aka M.Lee, from Burundi and Captain Blu of Nigeria on the recently released track Ulikwa wapi.
‘Ulikwa wapi’ is a Swahili phrase which means ‘where are you going’ and the track is sung in Swahili, English and Nigerian Pidgin to give it a wider geographical reach across the continent.
Produced by Captain Blu, the song does not shy away from its African roots as the beat is mainly composed from traditional drum and a bass line fused with an aggressive synth.
Despite their different native languages, the three artists seamlessly trade bars to yet again reinforce the spirit of Ubuntu preached by the founding fathers of independent Africa.
According to Maleta, problems such as corruption and nepotism are impeding Africa’s youth from realising their full potential. The artists felt that it was important to highlight these issues through music.
“This song talks about the challenges faced by some youths as they try to realise their full potential. In Africa, corruption, nepotism, hate and jealous are obstacles that are adversely impacting the growth of youths, especially those in arts industry,” said Maleta.