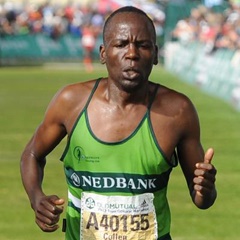 CAPE Town – In a huge coup, the Nedbank Running Club has secured Zimbabwean Collen Makaza to compete in the green of the Nedbank Green Dream Team at the 2016 Old Mutual Two Oceans Marathon.

“This is an exciting development for us,” says Nedbank Running Club Team manager Nick Bester.
“Collen has twice won the World 50km Title as well as the Legends Ultra in East London. He also holds the record for that race.”
“It is fantastic to have the support of Nedbank for Collen at this year’s Old Mutual Two Oceans Marathon,” says Craig Fry who is Makaza’s manger.
“Collen is hungry this year and after his second place finish last year, he is in dangerous form.”
In 2013 Collen Makaza was fourth at the Two Oceans Marathon and also won the inaugural Legends Ultra Marathon in September that year, setting the course record which still stands to this day.
In August 2014, four years after his first World Title at the World 50km Championships, Makaza was once again on the top rung of the podium at the World 50km Championships.
2015 was the closest Makaza came to winning the Two Oceans Marathon. With 10km to go he was locked in a titanic battle with Motlokoa Nkhabutlane. The latter was able to open a gap over Makaza in the final 8km that was never closed. This time round the two will be team-mates as both are running for the Nedbank Dream Green Team.
That runners-up spot has Makaza on fire for 2016.
“He has been training exceptionally hard just outside of Harare in Zimbabwe,” Fry confirmed.
“He wants this race badly now. He has had enough of not being able to close out and has learnt a lot in the last few years. Also with the race back to the original route over Chapman’s Peak, we both believe he has every chance of winning on the March 26.
“He certainly has all the credentials. Two-time World 50km champion and twice the Legend Ultra Marathon winner, Collen knows how to race.”