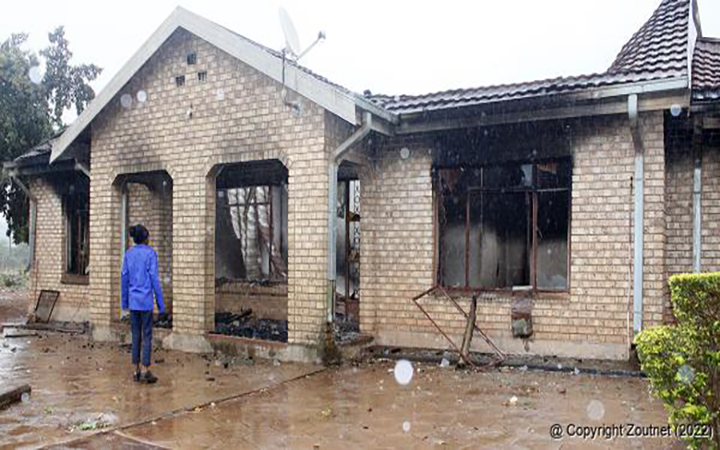 By Staff Reporter and SA media

SOUTH Africa: A Zimbabwean immigrant accused of raping a middle-aged woman from Matangari in Limpopo province was recently beaten to death by an angry crowd, it has emerged.

The tragic incident occurred earlier this month and, a week later, the mob burnt down the house where the Zimbabwean lived, accusing the owner of harbouring illegal immigrants.

The now-deceased suspect, who has yet to be named, reportedly broke into the victim’s house at night with an accomplice.

According to Matangari village’s traditional leader, Vhamusanda Vho–Mutulagole Nyamande, the victim told said one of the men had ransacked her house while the other one raped her.

“After she had opened a case, the police brought her to my palace, where she detailed her ordeal. She said she knew the Zimbabwean as he had been living in the village for years,” Nyamande said.

When the villagers heard about the incident the following morning, they ran amok, blocking roads with rocks and burning tyres and other flammable objects.

Nyamande said he had to calm the angry crowd down, pleading with them not to take the law into their own hands, but rather to help the police with their investigation.

The following day, the community had a meeting at the royal palace and decided to go and look for the suspects themselves.

According to one Norman Siebathavha, secretary of the Matangari Traditional Council, some community members saw the suspect that same afternoon hiding close to a nearby the river.

“When he saw the villagers, he ran and jumped into the river. After searching for him for some time, they found him hiding inside the reeds. They fished him out and took him to the royal palace, and the traditional leader called the police,” he said.

However, while they were waiting for the police to arrive, the angry crowd started to interrogate the suspect, beating him with different objects, and he succumbed to his injuries.

Police spokesperson Colonel Malesela Ledwaba said the police at Mutale were investigating two cases – one of rape and one of murder.

“We haven’t effected any arrests yet. Police investigations continue,” he said.

Meanwhile, after attending a meeting with their traditional leader and the royal council last Tuesday afternoon, the Matangari villagers – armed with sticks and stones – reportedly marched to the house of a 55-year-old local man and burnt it to the ground.

Locals the now-deceased Zimbabwean had been a tenant at the house and the mob accused the home owner of harbouring illegal immigrants.

When they arrived at his house, they started by breaking the windows before setting the house on fire.

The man’s13-year-old son, who was coming home at the time of the incident, said he was surprised to see such a huge crowd descending on the family home

“It was terrifying. I just stood there and saw our whole house being engulfed by fire. I lost all my clothes, including books and school uniform. I also saw some members of the community stealing live chickens,” he said.

The owner of the house said he was also in shock.

“All I can say is that all I have worked for in my life is gone,” he said.

Community members who witnessed the event said police had been informed of the crowd’s intentions to burn down the house but had done nothing.