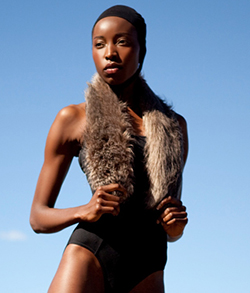 Renny Chivunga, 35, has lived in Newcastle, NSW, since 2001
As well as modelling, she has studied engineering and been to flight school
Chivunga has been in films like The Great Gatsby and been to NYFW

FROM walking the catwalks at New York Fashion Week to appearing in films like The Great Gatsby, Renny Chivunga, might sound like a regular bona fide model.

However, the 35-year-old, who was born in Zimbabwe, and who now lives in Newcastle, New South Wales, doesn’t have a life that is as clear cut as most in her profession.
As well as modelling, Ms Chivunga has studied engineering and been to flight school.
She has also had to adapt to a way of life that is completely different to what she was used to at home in Zimbabwe.
“When I first arrived in Australia, and studied at Newcastle University, I was amazed to see so many cultures represented, and to see just how accepting everyone was,” Chivunga told Daily Mail Australia.

“The university gave me a false impression about the community’s understanding of Africans,” she said.

“When I left university, I struggled to find someone who wasn’t nervous to do my hair or make-up. I was constantly asked by people to feel my hair when I was in line for food, and others wanted to feel my skin.
“When I first started modelling, I was the dark girl who had to be made up, because there weren’t many hair or make-up specialists with the knowledge to handle African skin or hair. It was tough.”
However, according to Chivunga, attitudes have somewhat changed in the past 15 years, and she has, for a long time, loved living in Newcastle.

She describes it as a ‘friendly’, ‘willing’ community, in which ‘you can expect to be greeted in the streets as you walk by’:Advertisement

“I come from a land-locked country, and every time I go to the beach, I marvel at how beautiful the water and Australia is.
“There’s isn’t much about the country that I don’t like,’ she said.
According to the model, while Chivunga has had some incredible modelling experiences – including modelling in shows at New York Fashion Week – she intends to soon move back to her primary passion – engineering.
When she does, she hopes to potentially move back to Zimbabwe, and inspire other young women to follow their dreams:
“For a long time, I worked full-time as a research engineer, while modelling and commuting and juggling all sorts of different things,” she said.
“I did not want to lose sight of my eventual future in engineering.
“Having said that, it was really hard trying to remember that there are only a handful of Tyra Banks in the world!”
As for the rest of her life, Renny Chivunga says that there is still plenty to do and accomplish:
“I would eventually like to be a leader in my field so that I go home to Africa and solve some basic problems,” she said.
“I would like to help to create a Zimbabwe that is a desirable place in which to live, work and invest for future generations.
“Inspiring other women to do the same along the way would be nice, too.”