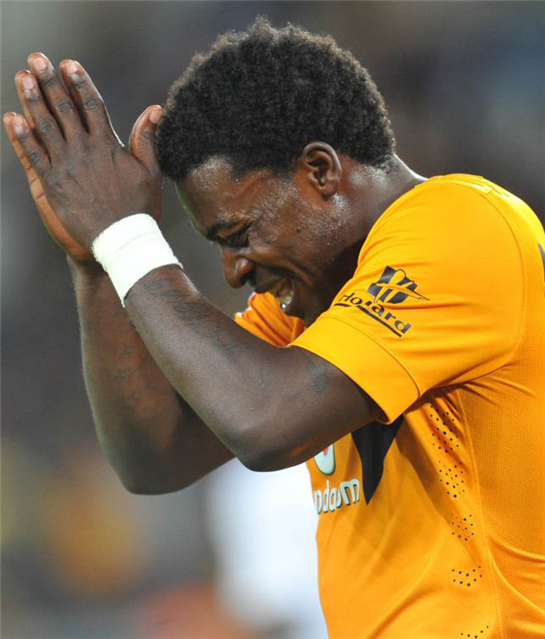 KINGSTON Nkhatha now on the books of South African Premiership side SuperSport United has been ranked among the top five strikers at the big three clubs despite having been victimised by a section of Kaizer Chiefs fans during his stint at the club.
According to Kick Off, the statistics prove that the Zimbabwean forward’s strike-rate compares favourably when compared with all the strikers currently on the books of Chiefs, Orlando Pirates and Mamelodi Sundowns.
Nkhatha has scored 43 goals in 115 starts as a PSL player since arriving at Free State Stars at the beginning of 2008, which equals a strike-rate of 37.4% with only Katlego Mphela, Lehlohonolo Majoro, Katlego Mashego and Mame Niang holding a better record at the country’s most influential clubs.
The burly forward has done duty at Ea Lla Koto, Black Leopards and Amakhosi in his time in the PSL and also did time at Carara Kicks, although figures from his time in the First Division where he struck 11 goals in 20 starts have not been factored into his strike-rate.
Considering that he offers more than just scoring goals in his game, Nkhatha can stand proud that he is amongst the better strikers in the PSL despite the ill-treatment he was subjected to by sections of the Chiefs fans during his two-and-a-half-year stay at Naturena.
In simpler terms, Nkhatha has averaged a goal in every 2.5 games he has started which translates to 10 goals in every 25 games he has started while attached to a PSL club.
Only Katlego Mphela holds a better scoring percentage than Nkhatha at Chiefs with the former Bafana Bafana man holding a 49.67% strike-rate from the 153 games he has started, scoring 76 goals from his time at SuperSport, Sundowns and Chiefs.
However, Mphela is yet to genuinely repay Chiefs for the trust they showed in him when they recruited him a year ago as he has spent most of the past 12 months dealing with injuries instead of playing football.
Other strikers at Chiefs hold records dwarfed by Nkhatha with Bernard Parker standing at 29.67% (182 starts, 54 goals), Siphelele Mthembu at 33.8% (71 starts, 24 goals), Matthew Rusike at 28.57% (21 starts, 6 goals) and new arrival David Zulu who is at 34.48% (29 starts, 10 goals).
Nkhatha still holds a favourable strike-rate of 30.8% (68 starts, 21 goals) compared to the other strikers at the club.Advertisement