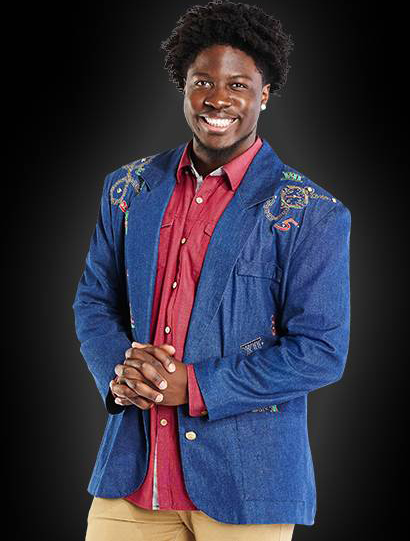 ZIMBABWE born psychology student Godfrey Mangwiza, aged 22, is one of the guests for Season 3 of Big Brother Canada which premieres on Monday.
Godfrey says he will stop at nothing to win the $100,000 prize.
In this interview for the show, the Toronto-based student reveals more about himself …
Describe yourself in three words:
Charismatic. Indecisive. Crazy.
Do you have a strategy to win Big Brother Canada?
My plan is to keep everyone distracted and paranoid. I’ll be the one in the house stirring up the rumours. My goal will be to get people to really go against each other while I fly under the radar.
I’m bringing a gold ring in the house with me. When I see one of the guys get into a showmance, I’ll plant the ring in his suitcase and then show it to his girlfriend in the house and say, “Look! He’s been playing you. He’s a married man!”
I’ll spread people’s secrets and I’ll lie to the houseguests about Canada giving me special powers. I’m a student of psychology and sociology and I’ve studied every version of this show from the Canadian series to the African series.
My education will serve me well in the house, but I won’t tell the house that I’m a student. I’ll tell them that I dropped out of high school. They won’t know how big of a threat I truly am.
If you could take one thing inside the house, what would it be and why?
I would take my cat Daisey. I share her with my girlfriend. My cat is so cute and she never bothers me. She just does her thing and when it’s time to go to sleep, we cuddle. She’s also great at catching rats and when you’re in the Big Brother Canada house, having some help catching the “rats” would be a great advantage.
Brain vs. Brawn. Which challenges, physical or mental, do you fear most?
I have the brains and I have the brawn. I’m an athlete and a scholar. I could win everything, but I won’t. I don’t want to excel in challenges. I want to play dumb in the house. In real life, I love working out and going to the gym. Sometimes I go twice a day.
Arnold Schwarzenegger is my idol. He immigrated to the U.S. with nothing and became a huge public figure by excelling in body building, acting and politics. He does everything so well and he’s an extraordinarily adaptable person. I would love to emulate him, but the houseguests will never see my drive or this side of me.Advertisement

If you won, how would you spend the $100k?
I would pay off my student debt and I would bring my grandma to live here with us. Grandma is in the UK now and bringing her here would be my number one priority. My grandma raised me in Zimbabwe. Life was hard there and she looked after my two sisters and me when my parents couldn’t anymore. I’d give anything to live with her again.
Who is your Big Brother Canada idol and why?
I would say Emmett (BBCAN1) but only because he played an amazing game. He hid behind Jillian (BBCAN1) and let her do all of his dirty work. So I can’t say I respect him, but I think he competed very well.
True North strong and free. What is your favourite thing about Canada?
The winters. I love the winter weather. I get to stay in and hibernate. Coming from the hot desert, you really appreciate the ice cold. I freaked OUT the first time I saw snow. It started to come down and I RAN inside my house to take cover. I thought it was going to be so heavy and crush me. I looked out my window and saw people standing outside and thought, “why the heck are these white people just chilling outside!?”
Godfrey Mangwiza – Big Brother Canada 3