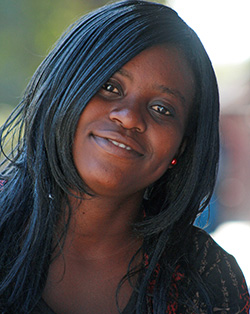 MULTIPLE award-winning opera singer, 21 year old Molly Dzangare, has been invited to compete at this year’s Amazwi Omzansi National Opera Competition to be held in Durban, South Africa from the 6th to the 16th of August.
She is the only Zimbabwean in the competition and will battle it out against 35 other contestants from South Africa and Swaziland.
Molly is not new to this kind of competition, having participated at such fora as National Institute of Allied Arts Festival 2014 where she won the Opera Cup and Lieder/Opera Cup and the Most Promising Student Cup.
She has also won the Afdis Awards “Best Musical Performance” trophy and was invited to perform at Bona Mugabe Chikore’s wedding last year.
The daughter of late Israel Dzangare, who was choir director and founder of the Chitungwiza Harmony Singers for over 17 years, Molly told NewZimbabwe.com that her father influenced her to sing.
“My father coached me, giving me a good foundation, having been the first person to recognise my talent,” she said.
“My first public singing was in his choir when I was about 6 years old, singing solos in church and at Seke 5 Primary and Seke 1 High Secondary doing solo parts.
“I then officially joined my father’s choir during my high school years until I became their soprano soloist up to the present day.”
In April 2013 her unique voice was heard by veteran opera singer and teacher Lorna Kelly who sponsored Molly’s professional training classes.
From then on, the sky has been the limit for the Chitungwiza-born opera singer.
She has featured as lead soprano at the Festival of Viennese operetta of which Lorna Kelly is the musical director.
“Ms Kelly cast and trained me in the highlights of Die Fledermaus, The Merry Widow and The Gypsy Baron,” Molly explained.
“This production was held at the prestigious Reps Theatre, running for five nights.”
“There I was noticed by Milan Djorjevec – the Austrian Honorary Consulate who also coached me and fine-tuned my voice.”
“Last year Ms Kelly entered me in the Harare International Festival of the Arts where I sang songs from the repertoire of Old Italian, German Lieder/Art Songs, Opera and Operetta.”
Speaking about her chances at the Amazwi Omzansi National Opera Competition in South Africa, Molly said she is optimistic that she will bring the trophy home.Advertisement

“I happen to be the only one from Zimbabwe and I promise to raise the flag high and bring the prestigious award home.
“With God’s guidance and hard work which has taken me this far I will be Zimbabwe’s opera ambassador there.”
Having studied the theory of music and piano at Music Cross Roads Academy in Harare, Molly hopes to study Opera at an advanced opera school.
She says her ambition is to become an international opera singer, representing her country Zimbabwe.
“My desire is to perform at the Vienna Opera House, Metropolitan Opera House and at any other international opera festivals.
“I would like to work towards entering the Cardiff Singer of the World as well as the Maria Callas Grand Prix competitions and any other prestigious competitions.
“I know if I get these opportunities to prove myself I can be who I want to be and who I was born to be – an opera singer.”
Molly Dzangare – O Mio Babbino Caro (Puccini)