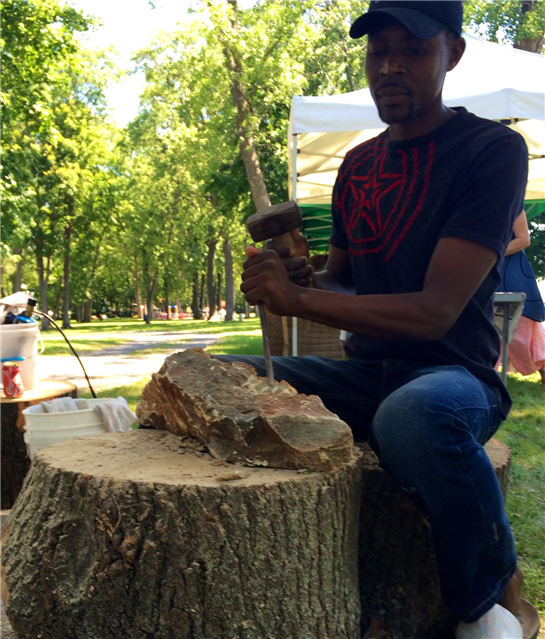 FOR Vengai Chiwawa, every stone he carves is “full of life.”
So do a handful of his sculptures on display at Centennial Park in Beaconsfield, Canada, as part of the 10th annual Shona D’Afrique outdoor exhibition, organized by ZimArt Rice Lake Gallery.
“I feel like this is something I need to do,” the 39-year-old Zimbabwean told the Chronicle last week, during one of his sculpting demonstrations.
Chiwawa’s sculptures explore the themes of life stages – centred upon the role of the woman.
According to Fran Fearnley, the organizer of the event, the artist is unlike the previous artist-in-residence her Peterborough, Ont. art gallery has hosted since it was founded in 2000.
“There is a kind of delicacy to his work that’s very expressive. In some ways it’s more representational, and in other ways it’s more soulful,” she said, who met Chiwawa, via last year’s ZimArt’s artist-in-residence Simon Chidharara.
He, too, is inspired by women.
The two artists, however, said Fearnley are “distinctively different.”
“Simon [Chidharara] is influenced by his rural upbringing, whereas Vengai [Chiwawa] spent much of his time in an urban area,” she added.
Chiwawa was born in 1975 in Guruve, a region with a strong sculpting tradition. In fact, his father Edward is a well-respected, first generation sculptor in Zimbabwe. His mother, too, was a sculptor.
Born into a family of sculptors, the art form came naturally to a then 7-year-old boy.
“Growing up in such an environment, you get attached to it,” said the self-taught artist.
He turned professional at the age of 15, sculpting stones inspired by his daily surroundings.
But for Chiwawa, his close bond with his mother and women in general, are the source of his current sculptures.
“Women are the source of life. To me, women are like flowers in a garden,” said Chiwawa. “I enjoy them very much.”
The sculptor hopes his art work plays, at a minimum, a small part in improving women’s lives around the world.
In the meantime, Chiwawa can be seen sculpting on-site in Centennial Park until July 20, when the Shona D’Afrique exhibition concludes.
For more information on Vengai Chiwawa or ZimArt, visit www.zimart.ca.
This article was originally published by the West Island Chronicle Advertisement