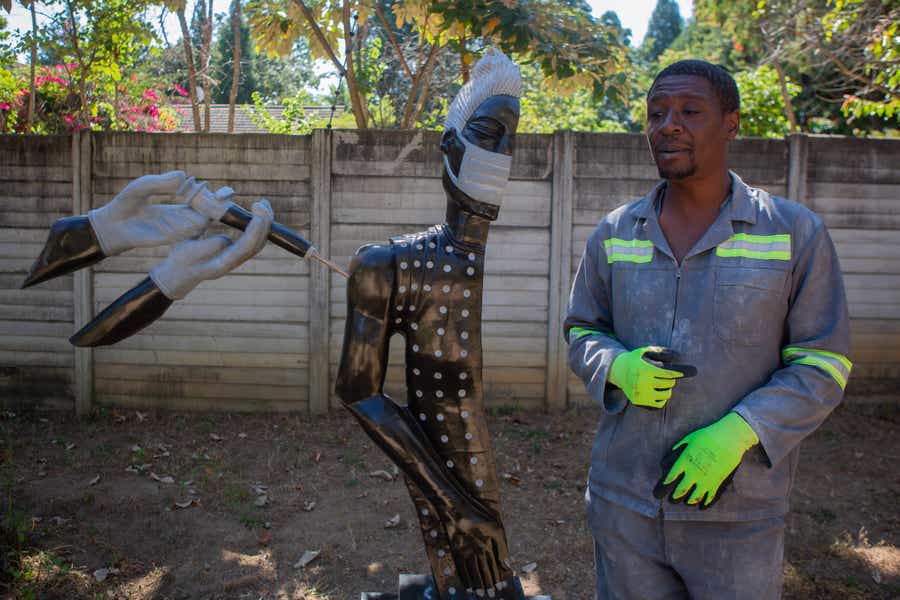 HARARE: He’s an artist not a doctor, but when the pandemic hit, Zimbabwean stone sculptor David Ngwerume immediately knew he had a role to play in preventing its spread.

“When Covid-19 struck the world, I found myself having a calling,” the 41-year-old says. “I was compelled – I had a duty to play my part in documenting and fighting the pandemic.”

At first he used his work to encourage people to wear masks: “In all of the confusion at the beginning, I produced a sculpture on masking up and displayed that piece and showed it to the world through my social media platforms. It captured attention from around the globe.”

But if face masks were contentious, that was nothing compared to the controversy and misinformation that accompanied the global rollout of the Covid-19 vaccine. Africa has struggled with the dual challenge of a lack of supplies and high levels of vaccine hesitancy, stoked by viral myths and misconceptions.

In Zimbabwe, just 29 per cent of people have had one dose of the vaccine, but that rate is higher than the continent as a whole, at 18 per cent. 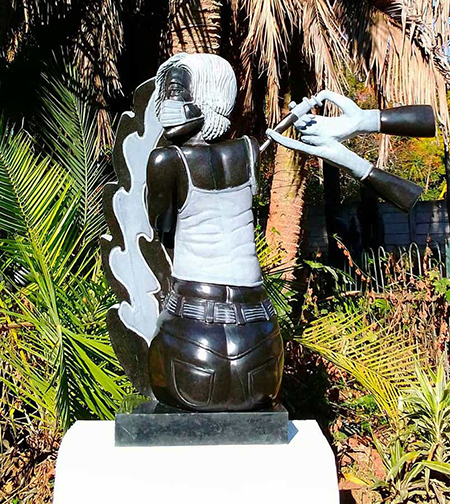 It is here art has a crucial role to play, Ngwerume says: “The modes of communication that we are using to promote vaccination seem to be authoritarian, they seem to be – you know – forcing people. But imagine if that is portrayed in art, and somebody gets to understand that this is what we are calling for, you freeze them for a moment and they are able to think about it.”

Resistance to mask mandates, pandemic lockdowns or the vaccine are rooted in genuine fears, especially among those who feel marginalized, Ngwerume believes, and art gives scope for building an effective counter-narrative.

His sculpture ‘Arms’ in polished black springstone depicts a person receiving the jab, a half-torso unidentifiable as male or female, black or white. A pair of disembodied hands suspended in the air are administering the shot.

“People tend to despise good initiatives, dismissing them as something that pertains to a certain race, gender, or a certain tribe – usually not theirs. So I thought that I should present a neutral figure around the vaccine, because I was trying to peel back the religious barriers, the traditional barriers, the gender barriers, and try to portray that this vaccine is for you – for humanity.”

Ngwerume knew from the third form at school in rural northeastern Zimbabwe that he wanted to be an artist. His father helped to nurture his talent but also advised him to pursue a professional career alongside his art.

As a young man he was an apprentice to the sculptor Cosmos Muchenje, won a scholarship to study art history in Oslo and also graduated from law school in Harare. Now he has his own law practice. His work as an attorney, far from distracting him from his creative work, has informed it, he says.

“Being involved in society as an attorney has been pivotal, allowing me to grasp knowledge about the world that I can translate into my art,” Ngwerume says. He takes his legal cases in the morning; in the afternoons he is at his studio in the Harare suburb of Greendale, where he is locked in a battle with municipal authorities to have told him to move his work elsewhere.

“Unto the Third Wave”, a sculpture illustrating Zimbabwe’s surge of infections in mid-2021, has been selected for display at the Beijing International Art Biennale, and has already been shipped to China. Covid restrictions and other issues have prevented him from accompanying the piece, Ngwerume says.

Ngwerume is self-funding and bemoans a lack of resources for his art. His ambition now is for a commercial tie-up with some of the big vaccine manufacturers or even the World Health Organisation: the sculptor believes his art will help to win round those still dubious about getting a Covid-19 jab.

“Imagine that if Pfizer, Moderna, Johnson & Johnson, BioNTech … all these companies come together. We could work together on demystifying the myths that are hampering vaccination across the world using a different approach. Because laws and mandates and advertising don’t work.

“As a world, we have failed to convince everybody so we must come up with something that relates to people in a different kind of message.”