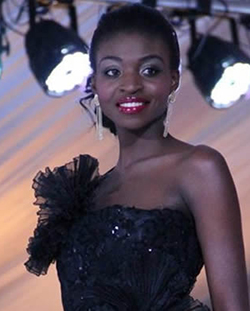 A NUMBER of Zimbabweans on Tuesday rallied to the defence of newly-elected Miss World Zimbabwe after locals said she was “ugly”.
Financial adviser Emily Kachote, 25, was given Zimbabwe’s top modelling title in a ceremony in Harare on Saturday. She will represent Zimbabwe in the Miss World contest.
Her selection prompted a flood of sometimes spiteful criticism on social media.
“Where is her beauty? Why didn’t they just say they couldn’t get a winner this year?” wrote one of several Facebook and Twitter users.
Popular Harare blog 3-mob.com posted: “Emily should never need to be defended. But because of the relentless mob we feel we have to.
“Emily did something many would never be willing to do. She opened herself up to the scrutiny of the whole world and allowed herself to be judged.”
“We have seen images from five years ago when she was perhaps less refined go up and make her something of a laughing stock which is just infuriating,” the blog said, in reference to old photos from Kachote’s Facebook profile that have been circulated.
In some cases Kachote was unfavourably compared to South Africa’s Miss World contestant Liesl Laurie.
Several former modelling title holders defended Kachote, including Miss Zimbabwe 2004 Lorraine Maphala-Phiri.
She told the state-controlled Chronicle: “Miss World isn’t only about outlook, it’s about the whole package… I also agree that… comparing our queen with Miss South Africa isn’t fair.”
Twitter user Natasha Tendai tweeted: “Why are people mad? She’s beautiful wani…#MissZim2015”.
User Adolf Mugandiwa said: “She is beauty of her own league. She can surprise us in many ways.”
Miss Zimbabwe contestants were selected after a boot camp in which they did their own laundry, cooked for the elderly and orphans, played soccer, and engaged in public debates.
The contest is run by the wife of Zimbabwe’s army chief Constantine Chiwenga. Senior military officials attend the finals each year.
Obert Gutu, a spokesperson for the main opposition Movement for Democratic Change was quoted as saying: “(The contest) should never be used as some form of political and/or military forum where politicians exploit the pageant to score some cheap political points.”Advertisement