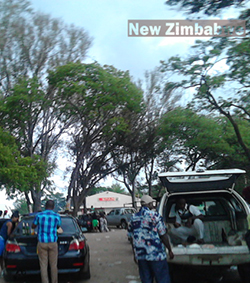 ZIMBABWEANS put aside their grief over the country’s economic meltdown this festive season with many finding solace in beer drinking while others tried their luck at sports betting.
Thousands of people were thrown out of work during the year adding to an already high unemployment rate estimated at more than 85 percent.
And to make the festive mood even more sour, civil servants failed to get the annual bonus before being told their December salaries would only be paid in the first week of the new year.
But there was little sign of despair around Harare over the Christmas weekend as local pubs were teeming with revelers, many discussing the country’s political and economic problems.
Popular spots such a Mereki in Warren Park, Zindoga shopping centre in Waterfalls, KuHuku in Braeside and KwaFarai in Glen Norah, were teeming with revelers.
The road to Lake Chivero, another popular site with locals, was also congested with traffic moving at a snail’s pace as many went for a day out at the lake.
The situation was the same at most bottles in and around capital.
“I said to myself it’s better to send the few dollars I had to my rural home rather than waste fuel travelling to and from Masvingo,” said Eric Moyo at Mereki.
“So the little money that is left is buying me few beers with my friends.”
Amai Tanaka who runs a braai stall said business had been impressive since Unity Day.
“People have been flocking to this area drinking and merry making. We hope this continues until the new year celebrations,” she said.
Zindoga shopping centre was equally busy and it was difficult to secure a parking bay.
“They are no recreational facilities to go with family and friends, so we are here to celebrate Christmas,” said Mercy Chipunza.
“Life in Zimbabwe is surprising,” said Steven Matanhire who had an entourage of female friends.
“You would think we do not have money to spend because of the economic situation but look at what is happening here; people are drinking beer and having fun.”
While many were enjoying ice cold beers and braais, some were trying their luck at sports betting shops.
The facilities are now found at nearly every corner in the central business districts and high density suburbs of the country’s towns and cities.Advertisement