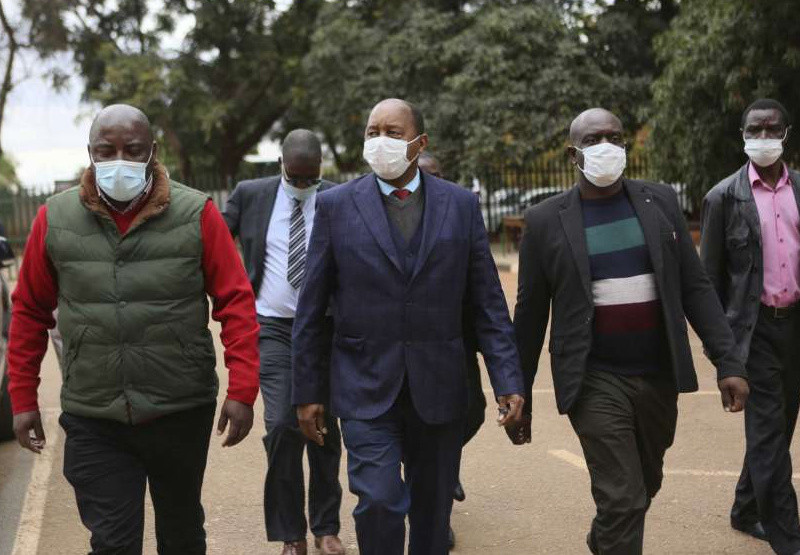 HEALTH Minister Obadiah Moyo, who was arrested by Zimbabwe Anti-Corruption Commission (ZACC) officers Friday night, is reported to have spent the same night at his home before coming to court the next day.

This was contrary to earlier reports he spent the night detained at Harare’s Rhodesville police station.

Moyo was arrested Friday over a US$42 million scandal surrounding the illegal procurement of coronavirus drugs, test kits, and equipment.

The scandal has sucked in President Emmerson Mnangagwa through son, Collins, who however vehemently denies any involvement.

Moyo’s arrest followed mounting pressure from the opposition and social media calling for his resignation and incarceration.

Mnangagwa’s government, which claims to be hands-on in fighting corruption, has not commented on Moyo’s arrest.

It emerged Saturday the “arrested” minister drove to the Harare Magistrates’ Court Saturday morning in style, in a convoy of four State-issued luxury vehicles, accompanied by aides and ZACC investigating officers.

Also accompanying the graft accused minister was his wife, Memory and a handful relatives.

Moyo’s treatment is the complete opposite of the harrowing experience that MDC Alliance co-vice presidents Tendai Biti and Lynnette Karenyi went through on their arrest early this month after attempting to enter MDC’s Harvest House headquarters.

Biti on his release said; “We were not provided blankets or mats on which to sleep. The toilets were stuffed with torn copies of The Herald, the state-owned newspaper, for which there is no better use. There was no water and we were forced to walk in filth without shoes.

“In our new holding room, other prisoners were present, including policeman Shungudzemoyo Kache, who had been charged with sedition for allegedly calling Mnangagwa ‘a used condom’.

“Most had been arrested for not wearing masks and hadn’t been able to pay the fines. Yet to heap irony on the ridiculous, there was no social distancing, temperature checks or sanitisers provided then or at any point that day.”

Moyo becomes the second serving minister to be arrested under Mnangagwa’s administration.

The first being former tourism minister Prisca Mupfumira, who had to endure weeks in remand prison facing corruption charges before she was granted bail.

Moyo was granted a $50 000 bail by chief magistrate Munamato Mutevedzi. Surprisingly, the state did not oppose bail considering the seriousness of the offence.

Court officials allowed Moyo to pay bail through swipe and he took back a box full of cash he had brought with him.

The "we" who are everything are himself, his family, his clan & his cronies. So @ZACConline charged Jorum Gumbo but he was not prosecuted. And Obadiah Moyo was released from Rhodesville Police station last night & his bail was not opposed today. They're everything!#ZanupfMustGo pic.twitter.com/CbLuHwvXNW

So he was arrested & he didn’t sleep at the police station like everyone else!

This shows you that this is choreographed to placate you bcoz Obadiah Moyo was not alone, he represents his masters!

Mnangagwa is not bothered about corruption & LOOTING!

I said don’t celebrate yet! pic.twitter.com/N5I9shOwSj

Other social media users were equally not amused.

“Selection of the application of the law. But time will tell. It’s gonna be finished not so long ago. The rule of law will catch up with them,” wrote Promise Darling on Twitter.

“This is just pathetic Idi should respect us,” said Tanaka Shumba.

London Tom wrote; “That’s why he is so eager to have the power to appoint the Prosecutor General. You also wonder why he picked Hodzi as the PG when he scored less points.”

Bright Munamwe wrote, “We are doomed with this captured justice system. We are not going anywhere.”

Paul Justice commented, “I think it’s just makeup arrest, it’s not real. Just confusing the people only. Why are they not arresting the one who lied to the country and the world, that it was $60 million donation towards Covid-19 programme from Drax (International)?” .

General Tongo wrote; “MDC trio denied bail because its crime of reporting that they were abducted and subjected to sexual assault, hurt the economy. The same court sees no hurting of the economy in the looting of millions of public funds.”