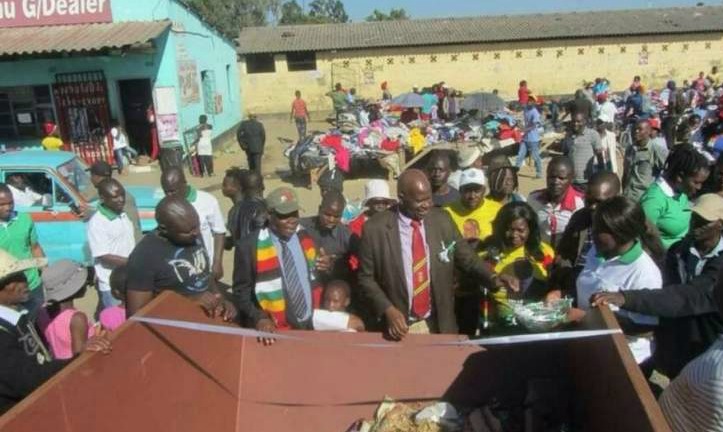 Finance minister Patrick Chinamasa has been trending on social media following his gracing of an event to launch a garbage bin in Manicaland.

The Zanu PF cabinet minister is seen on the images circulating cutting the ribbon tied around a skip in Rusape.

On social media, Zimbabweans have been either mocking under the #Chinamasachallenge hashtag or condemning him for wasting government time attending “silly” functions. Some users have described him as the clown of the year.

In one picture, Chinamasa is being invited to cut the ribbon (tissue) tied around a toilet seat. Others mimic him cutting the ribbon around a dollhouse, soap tablets, slip ons, pot, a loaf of bread, laptop, a plate of sadza and meat. Worse of all is one which has a ribbon around condoms with hand holding pair of scissors ready to cut it.

Our New Zimbabwe said on Tweeter, “Min Chinamasa demonstrated that mega deals & mega inflows of FDI have started bearing fruit by officially opening a crucial infrastructure project in Rusape! The project will create hundreds of jobs becoz people will setup small businesses in the vicinity! #ChinamasaChallenge.”

However other publications have pictures of the treasury boss opening a sports complex in Rusape area, Vengere Multi-Purpose Sports Court, the same day.

In a troubled economy riddled by poor service delivery, corruption and bad governance, Zimbabwean politicians have taken to taking pride in mediocre developments particularly towards elections as they seek to maximize every opportunity to sell their promises to the public.