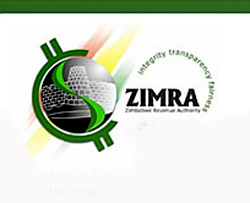 THE Zimbabwe Revenue Authority (Zimra) said Friday that it is owed US$1billion in unpaid taxes and is disappointed with low response to the amnesty it offered to taxpayers.
Government granted a tax amnesty for all classes of taxpayers for offenses committed from 2009 when the country adopted multiple foreign currencies to September 2014 in a bid to shore up the country’s dwindling tax revenue.
The period, for which taxpayers can be pardoned, opened on Oct. 1, 2014 and expires on March 31 this year.
Zimra Commissioner General Gershem Pasi told a press conference Friday that only 1, 471 applications had been received to date.
“We are somewhat disappointed with the response. We expected taxpayers to come in their thousands,” Pasi told state-run news agency New Ziana. “There is a lot of evidence of wealth in the country.”
Pasi said the tax collector was not killing the local industry but wanted to pursue measures that would ensure industry survival given the economic challenges in the country.
“We might do all we can to collect the one billion dollars but if we close the companies and industries what do we do tomorrow?” he asked.
He said while clients would be accorded terms to settle their tax obligations, no lenience will be given to those whose taxes will not be in order after the amnesty period.
“We will be seeking stiffer penalties for truant taxpayers after the amnesty,” he said, adding garnishee orders would, however, be used as a last resort.
The tax amnesty, which offers relief on penalties, interest, non-prosecution for irregularities and discounts for early payments, was introduced to give relief to taxpayers as well as to encourage a culture of voluntary compliance while at the same time widening the tax base for Zimra.
Pasi said the amnesty was not applicable in cases where tax audits or investigations had commenced before October 2014.
Meanwhile, said Zimra had so far collected 468.53 million dollars since the beginning of this year against a target of 542 million dollars and attributed the below-target revenue to the slow nature of the first quarter as most industries took time to re-open for business after the festive season break.Advertisement