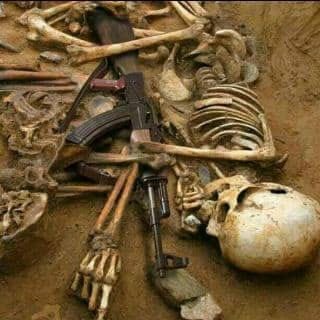 HUNDREDS of people have interacted online with a picture of a skeleton holding a gun, linking it to ongoing sanctions in Zimbabwe. But the gun has been photoshopped into the image, which also has nothing to do with Zimbabwe.

“Just examine this photograph carefully and ask yourself whether any right-thinking and patriotic Zimbabwean can ever support the imposition of illegal sanctions against our beloved country,” reads the Facebook post, which has attracted more than 250 comments.

On Twitter, the same person writes: “It is when I look at such emotional photos such as this one that I get fortified that my decision to make a U-turn & to start denouncing the imposition of illegal sanctions against Zimbabwe was the RIGHT DECISION.

“We shouldn’t sell our birthright for a few pieces of silver”. This tweet has been liked 162 times.

However, the image is unrelated to Zimbabwe. It has also been photoshopped to include the gun.

The original picture can be seen on the cover of Cliffs End Farm, an archaeology report from 2015 on an ancient mortuary and ritual site discovered in Thanet in England.

Pictures of the skeleton from different angles can be seen in other reports about the same archaeological research.

Missing context. The original photo was from an archaeological site in England. It has nothing to do with Zimbabwe. The gun has been digitally added.