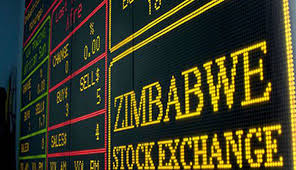 HARARE: Local investors have flooded the Zimbabwe Stock Exchange over the past two weeks, seeking a safe haven in equities ahead of the introduction of bond notes early next month.
The introduction of bond notes, a token currency which will circulate within a basket of multiple currencies and at par with the United States dollar, has been pushed to the first week of November from end of October, with $75 million worth of the notes expected to be in issue by the end of the year.
The government has resorted to printing the notes in a bid to ease the shortage of US dollar notes in the economy, which it blames on smuggling of the reserve currency as well as a gaping current account. The move has, however, spooked a banking public traumatised by a currency crisis that saw Zimbabwe print a $100 trillion note as hyperinflation galloped to 500 billion percent in 2008.,
During the rush, market turnover has come in at $9,897 million, which is 73 percent of the exchange’s average turnover in the nine months to September.
Uncharacteristic of the usually sluggish exchange, the industrial index has breached and remained above the 100 point mark gaining 17 percent from 98.96 points as at 30 September 2016 to 115.81 points on Tuesday. The mining index is also 14.88 percent firmer to 30.57 points over the same period.
Market capitalisation also rose to $3,188 billion compared to an average of $2,76 billion over the preceding nine-month period.
With no appetite for local counters, foreigners have remained net sellers offloading shares worth $7,818 million which is approximately 76 percent of the 9 month average sales of $10,27 million while only $1,77 million worth of shares has been bought by foreigners.
“Local investors are moving cash away from the banks in search of safer investments such as equities ahead of the introduction of bond notes in November,” noted an analyst with a stockbroking firm.

The analyst said there are no fundamentals that support the demand for equities at the moment but bond notes are being viewed with suspicion by the investing and wider public.
Valuations are negative and results published show waning earnings for most counters.Advertisement

“Asset allocations are now shifting towards equities as investors prefer to hold securities that can store value rather than holding cash or near cash assets which run the currency risk given the uncertainty associated with the surrogate currency,” said the analyst.
“As such, the demand for equities is only based on hedging not on economic fundamentals that drive the share price upwards such as good financial performance or market news that can positively affect the share price of a particular company.”
A good example is the case of the largest ZSE company by market capitalisation, Delta, which on Monday reported an eight percent decline in half-year revenue on weak volumes and depressed consumer demand but its share price has shot up from 60 cents as at 30 September 2016 to 76.62 cents on Tuesday, the analyst added.