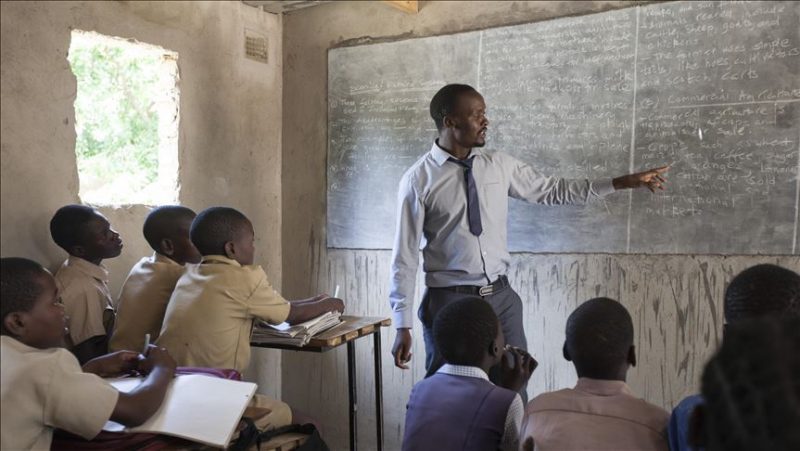 HOME-MADE benches line up under the shade of an avocado tree in the backyard of a Zimbabwe suburb, the home of a makeshift school for numerous students.

Scores of pupils have no choice but to drop government or council schools in the southern African country as school fees have been shooting up now and then amid galloping inflation. As a way out, they turned to attending courses at makeshift schools to evade the astronomical fees.

The fees of government and council schools have shot up over 300% this year. For instance, the fees across Harare’s local authority schools in now pegged at 400 Zimbabwean dollars ($23) per child for each school term of three months, a sharp rise from 60 Zimbabwean dollars last year.

According to the International Monetary Fund last year, Zimbabwe’s economy was battered by staggering inflation of over 300%.

The situation is even worse in boarding schools where fees have been set way beyond the reach of many parents like Reneous Gwenhure, a civil servant who withdrew his child from a local boarding school after failing to cope with the hike.

“I have taken out my child from boarding school, for now he will proceed with his studies at a home-based school closer home because the fees are fair,” Gwenhure told Anadolu Agency.

Such fees have driven many students out of boarding, who now have opted for the sprouting makeshift schools across the country.

Mberi is a 42-year-old man who is lecturing children with his colleagues at his house in Dzivarasekwa Extension, a high density suburb west of Harare, Zimbabwe’s capital.

“My business is doing well these days. I charge 120 Zimbabwean dollars ($7) per child attending my school and I have two qualified teachers I have employed who teach a number of subjects,” Mberi told Anadolu Agency.

For many like Mberi who have become proprietors of makeshift schools, churning out education for pupils fleeing exorbitant fees has become a thriving business, yet affordable for people who have endured the rising cost of education in standard schools.

Mberi said his school prepares students for examinations before they proceed to register to write at recognized examination centers.

He has been teaching almost 135 students every day at different times at his house, pocketing some 17,000 Zimbabwean dollars ($1,000) per month.

In other areas, under-tree-classes also have become common, known even to government authorities, and poor parents with children needing education have had to part with their dollars to get education in such conditions.
Perfunctory government disapproval

However, like many other Zimbabwean backyard schools, Mberi’s makeshift school is not registered and as long as he runs it, he has to play hide-and-seek with the government’s education inspectors.

“The government is aware that there are mischievous individuals setting up makeshift schools anywhere which are unregistered and therefore milking parents and guardians of their earnings. People should report such activities to police, it’s a crime to run backyard schools,” a senior education official of the Zimbabwe government, who requested to remain anonymous for professional reasons, told Anadolu Agency.

But, even as authorities denounce makeshift schools, education entrepreneurs like Mberi have remained adamant, and more than 1,200 makeshift schools are operating across the country, according to the Amalgamated Rural Teachers’ Union in Zimbabwe (ARTUZ), a trade union organization for rural school teachers.

However, the Zimbabwean government has claimed to have invested in over 5,750 primary schools and 2,300 secondary schools since its independence in 1980, boasting employment of more than 70,000 primary school teachers, 90% of whom have academic education.

According to ARTUZ, the rise of makeshift schools in Zimbabwe is justified.

“Zimbabwe has a shortage of over 2,000 schools. Our learners cannot be accommodated in conventional schools. Individuals are plugging this gap, but they don’t have enough resources to construct proper private schools,” Obert Masaraure, president of ARTUZ, told Anadolu Agency.

Disgruntled Zimbabwean teachers are behind the bulk of the emerging backyard schools due to poor wages, according to Masaraure.

“Teachers are disillusioned by the conditions of service in government-run schools, they are resorting to coming up with their own learning centers for survival,” said Masaraure.

And teachers like Mberi, disheartened by the poor government wages back in the days he worked as a government teacher, turned to running his own makeshift school from home.

The land redistribution exercise saw over 250,000 families benefitting from approximately 4,000 farms seized by the government from white commercial farmers.

These, according to Nesbit Gweme, an independent development expert in Zimbabwe, needed schools for their children, which were initially absent at the dawn of the land seizures, but consequently gave rise to makeshift schools.