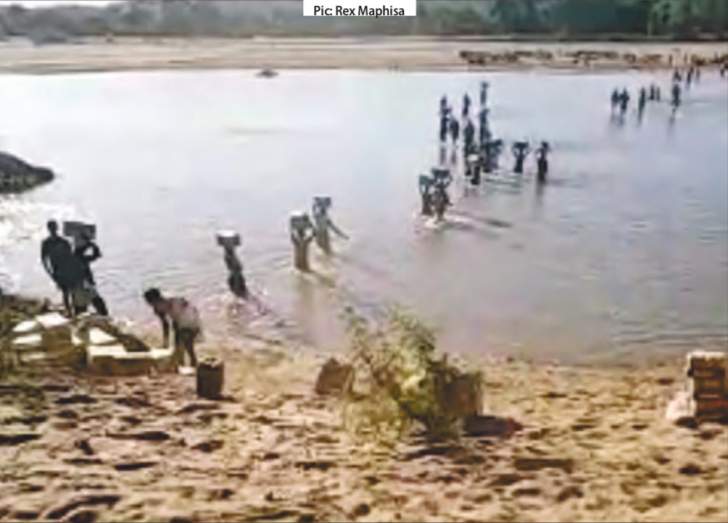 FOREIGN nationals continue to cross the full and crocodile-infested Limpopo River along the borderline between Zimbabwe and South Africa.

This is despite an incident in which three people are said to have drowned on Monday.

Some risk their lives in order to buy basic supplies in Musina, Limpopo, while others are coming to South Africa seeking greener pastures.

The Limpopo River is flowing strongly. When the river is dry, hundreds of undocumented foreign nationals cross it between Zimbabwe and South Africa. Now, when the river is full they have come up with plans to continue crossing.

Some people use canoes to transport undocumented foreign nationals across the river at a cost of about R200 per person. This happens in full view of the SANDF members deployed at the borderline.

A woman who a SABC News crew caught up with after crossing the river through a canoe says she’s aware of the risks.  “We know we are risking but just have to be strong. It is dangerous but it’s tough back home.  We just want to get food on this side.”

One of the canoe operators, Patrick Mudzi, says they have to make a plan as things are tough back in their home country. He says they transport food, groceries and other luggage.

“In Zimbabwe, people are struggling. So they try to use this river to cross but now the river is full. But some people use small boats to cross the river, but also they risk their lives. They are forced to cross because they struggling; they come to fetch food for their families.”

Three people alleged to have drowned

Meanwhile, three people are presumed to have drowned when their canoe overturned on Monday. Police divers were called in, but could not retrieve the bodies.

Mudzi says some foreign nationals are avoiding the border gate as the traffic queue is too long.

“The people fell in the water on Monday so these people died in this river so this river is very dangerous but these people don’t care; whether there were such incidents like that, people still cross because they are struggling in Zimbabwe and also because some people can’t use the border because there is a very big queue so they use this river to cross.