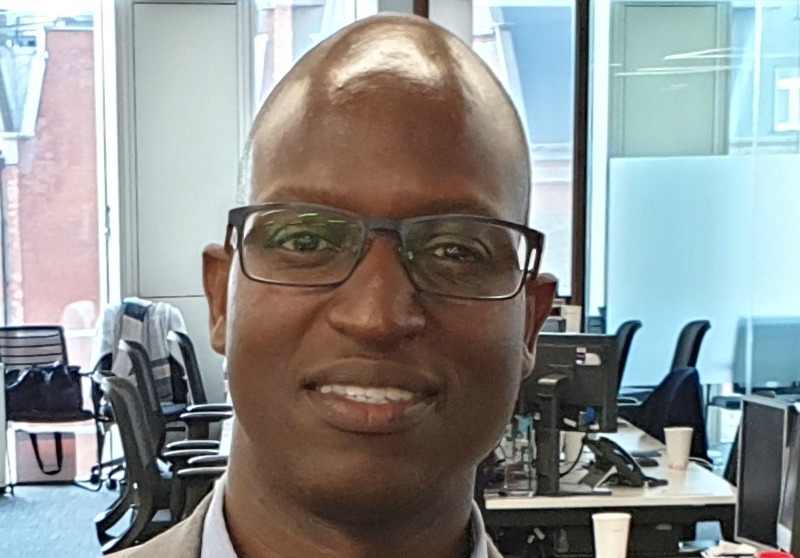 . . . In the winter, the surf off San Diego can get to be 8 to 10 feet high and it is exceedingly difficult to paddle the boat through the plunging surf, unless everyone digs in. Every paddle must be synchronized to the stroke count of the Coxswain.

Everyone must exert equal effort or the boat will turn against the wave and be unceremoniously tossed back on the beach.

For the boat to make it to its destination, everyone must paddle. You can’t change the world alone — you will need some help — and to truly get from your starting point to your destination, it takes friends; colleagues; the goodwill of strangers; and a strong Coxswain to guide them. If you really want to change the world, make sure you find someone to help you paddle . . .

Sometimes it’s impossible to see clearly what’s going on – especially in this world of 24-hr rolling news and social media. Nobody can escape.

I’m a Currency Dealer. My job revolves around constantly shaping and re-shaping my views as the news changes. To survive, in my world, I must stay abreast of the news and ahead of general opinion in order to help my clients make decisions. In a nutshell, no matter what is going on, my job is to make sense of what is happening in order to answer the question: What the heck is going on?

For this reason, I don’t like surprises (or at least, the wrong kind of surprises!)

In my world, surprises cost money and make clients angry – which is the same thing really. When forecasts for data which impacts the market (e.g. inflation, GDP growth, interest rates etc) are wrong – which they sometimes are – exchange rates move in ways that are contrary to what the market expected. For this reason, I like taking a few minutes each day to consider the contrarian view. Markets often follow patterns (technical analysis), and historically, when A has happened X would follow (fundamental analysis). Now, just because A is happening today, doesn’t mean that X will follow because this time around there may be B and C to consider; and when taken in totality A, B and C could lead to an outcome of Z. So, I often ask myself, “What could I be missing?” . . . “What would happen to a particular currency if such and such a forecast came out better or worse than expected? . . . What would happen if a certain assumption was wrong?”

So, the aim of this series of articles is to take a glimpse of the global economy and a few snapshots of specific economies, delve into a bit of history; and use observations thereof as a factual and rational basis for some crude decision-making. The purpose of all that is to come to bring up an unusual idea: to form a contrarian view, if you will.

The global economy is in peril because of trade wars, tensions between the US and Iran and Brexit risks which threatens both the UK and the EU economies. All major stock markets are in a tail spin. The yield curves in the UK and US have inverted, which suggests that a global recession could be imminent. The British and German economies – powerhouses that have been strong engines for European economic growth, for the past several decades, are shrinking. The latest Quarterly GDP figures for the two countries, released less than one week ago, show negative growth of -0.2%. If that is repeated in the next quarter, both economies would be in a technical recession. Many of us – whether we like it or not – could be on the verge of losing the very shirts on our backs.

True, economies always bounce back and things will eventually be right again. However, in my opinion, because risk is everywhere you look, if I’m to take a risk, I’d rather take it where the return, if/when it comes will be huge. Or, at the very least, if I’m re-balancing or diversifying my portfolio in an environment with stormy clouds on the horizon; then it is worth considering the potential returns of all the risky options at hand.

As I see it, some incredible opportunities lie in emerging and frontier markets. Zimbabwe is a frontier market. It is highly risky. Unfortunately, right now, the UK is also extremely risky because of the current fears of a Hard Brexit. Whether that will actually materialise or not is impossible to predict because of the peculiar nature of this bubbling pot that is Brexit. Its ingredients include a drizzle of incompetence; a generous dollop of farce, and a sprinkling of xenophobia. It will be served – if it’s ever served at all – on a bed of cold lies; several months late. Funnily enough, the two chefs involved in serving up this concoction (or previous versions of it) have been forced to resign. We are now on our third chef in 3 years. He only started work last month but already bets are being placed on how long he will last in the job. There is talk that he could be the shortest serving chef in history.

Now, many people are turned off by economic data. So, I’ve created these two charts, which I think, show easily comparable data. They compare annual growth rate between Zimbabwe’s GDP and the UK’s GDP. The red dotted line is a trendline which attempts to predict where the two economies will be at the end of the next three-year period. 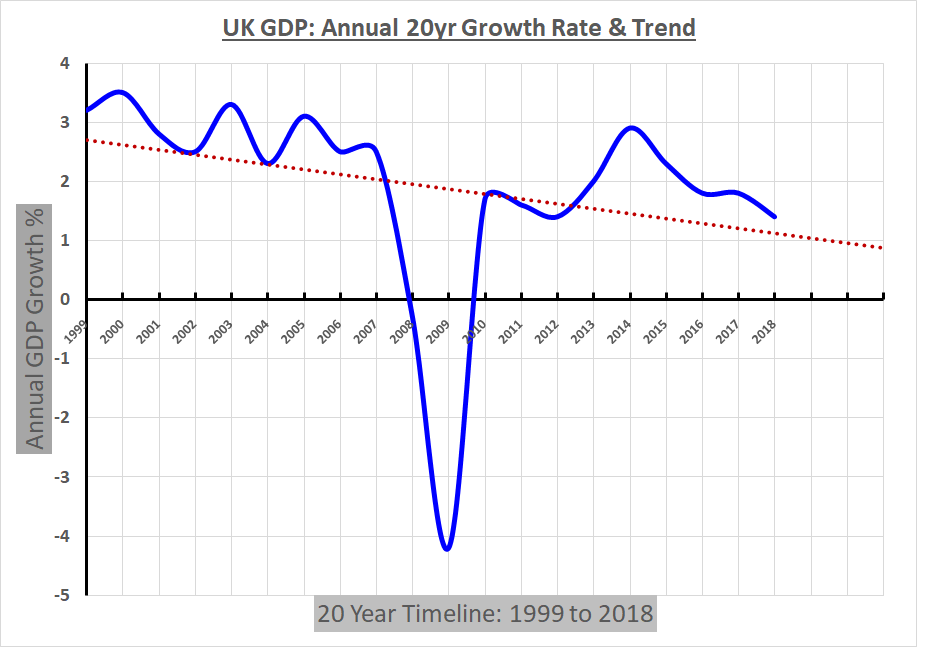 Comparing the UK and Zimbabwean economies, post-recession, the Zimbabwean economic growth has bounced back at a higher rate. An extrapolation of the trendline (red dotted line) seems to suggest that this could hold true in future too. 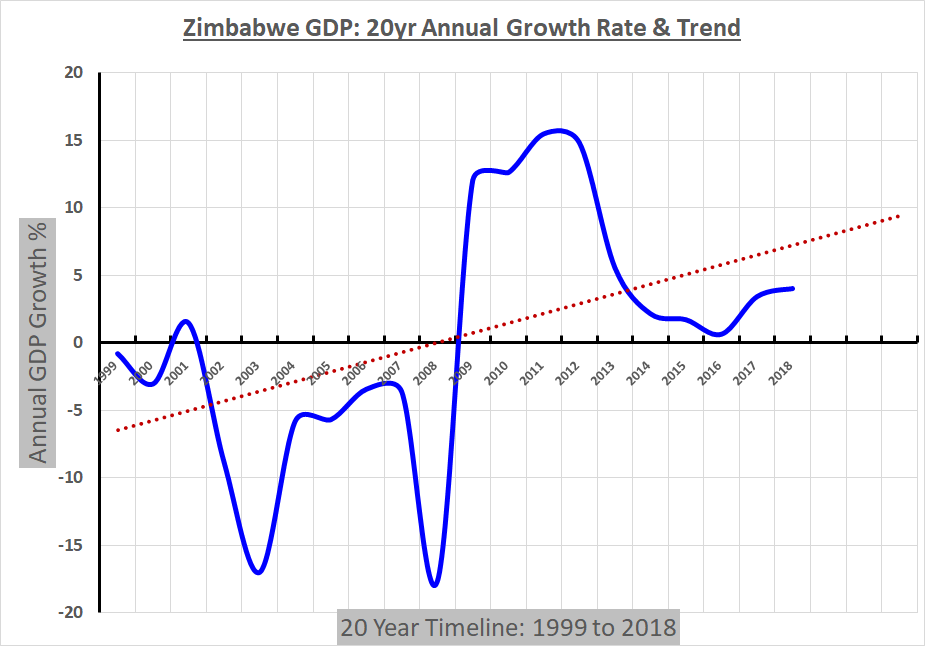 PLEASE NOTE: The data for 2019 is incomplete and it is unclear what the effect of Brexit will be. Furthermore, due to global and domestic events in the two countries, it is a serious possibility that both Zimbabwe and the UK could be on the verge economic downturn. My focus is on what happens after the downturn and therefore, in which of the two countries, to capitalise on tin the event of a downturn. The post-recession economic growth of the two countries and the GDP growth trends are the rationale for my contrarian view making Zimbabwe a worthwhile consideration for investment. Simply put: If you’re going to lose your shirt anyway, and possibly your underpants too, where would you rather do it; in Zimbabwe or in the UK? Choose your poison!

Now, all investments carry varying levels of risk. And foreigners considering investing in Zimbabwe have to price-in a “liability of foreignness” premium to the cost of their investment (i.e. “What are we prepared to lose?”) They must then factor that into their Return On Investment (“What must we get back to make this risk worthwhile?”). After those two questions are digested in Excel spreadsheets; the findings distilled via PowerPoint presentations and Boards have been wowed by the graphics from the Tableau Visualisations that accompany the whole show; frequently, the decision taken will always be the same: No, Nein, Non or Nyet. The differences between these answers isn’t just in the language but also the varying degrees of politeness with which the refusal is meted out. A refusal, no matter how polite, is still a refusal.

Fortunately, every economic downturn has its success stories.

And, as Zimbabweans in the diaspora, we have a “familiarity advantage”. We are better placed to gauge, manage and navigate several elements of that risk than non-Zimbabweans. For example, on our trips to visit families in Zimbabwe, we could source goods abroad, for as little as $100, which we re-sell back in Zimbabwe. If the return is zero; the loss is exactly that: $0. If the return is good, we try again with $200 worth of goods, which we might send with a friend or a family member or other cheap means, and so on. And if it works out, a business can be born out of that. The cost of doing that, in terms of both business risk and financial outlay, is minimal. A multi-national corporation cannot enter or leave a market at such minimal cost.

We can help source goods that are uniquely Zimbabwean (e.g arts and crafts); or that can be produced cheaply in Zimbabwe and be sold at competitive prices in our destination countries. At little or no cost, we can employ our networks of friends, family, neighbours and former schoolmates to help us source such products. A multi-national corporation does not readily exploit such networks.

When things go wrong in Zimbabwe, for example with the current power shortages, we find out about them almost immediately. Things going wrong mean there is as problem. That problem is often a business opportunity. There will be a reward to the risk taker who provides a solution to that problem effectively; cheaply and delivered to a high standard. The reward is commonly known as profit. And the most nimble-footed problem-solver is further rewarded with first-mover advantage. That often means enjoying higher profits for longer; before everyone else, and their ferret, jumps on the bandwagon and the profits are eroded – assuming of course that the problem still exists by then! A multi-national company cannot respond to opportunities in Zimbabwe as quickly as this.

So, why are we not doing it, or, doing it as much as we should? The picture is complex. However, amongst the long list of reasons (many of them controversial!) that I hear about, one of the most common threads is that there is a limit to what one can achieve through family and friends. I take that to mean that our individual networks are too small.

In my entire life I’ve never encountered anybody who complained of having too many friends! It is no coincidence therefore that many successful people say, “Your network is your net worth”. Others say, “You are the average of the 5 people you spend most time with.” It is through collaboration with others that we can leverage our efforts to achieve much more than we can on our own. It is through this collaboration that we can break out to achieve our true potential. I think that the logic of this statement holds true regardless of social status, race, gender, political affiliation or any other difference that keeps us, as Zimbabwean people, apart.

I intend to follow through with my contrarian view. And to give it a chance of success, I need to develop the networks that will enable this to happen. It is for this reason that I will be attending the Zimbabwean Outward Trade Mission to the United Kingdom to meet Zimbabwean and British business-people and explore opportunities for collaboration. It will be held in the first week of September in London and Birmingham. It is a chance to meet key figures in Zimbabwe’s growth sectors such as renewable energy, agriculture, tourism and mining. Specific opportunities for collaboration with UK companies exist for horticulture importers FMCG (retail, wholesaling & manufacturing), fabric suppliers, fashion, leather, arts and crafts; home designs, furniture suppliers and biometric access control systems.

The Zimbabwe Outward Trade Mission to the UK runs from the 2nd to the 5th of September. It has been organised by the British Government’s Department for International Trade, Zimbabwe Diaspora Network and ZimTrade. Click here for more details.

Crosby Pamberi is the CEO of Heritage Pay

DISCLAIMER: The views expressed here are the author’s own. They are based on information publicly available at the time of writing; and are therefore constantly evolving. None of the information contained here is, nor should be construed as financial advice. Past performance is no guide to the future. You should always seek your own independent financial advice (and, crucially, permission from your spouse!) before making any financial decision.